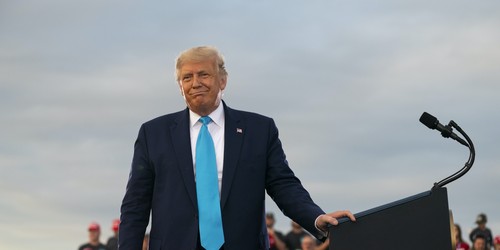 Former Vice President Joe Biden said this week that President Donald Trump was “embarrassing” himself due to what Biden described as a selfish desire to stay in office.

Joe Biden claimed to not be able to comprehend why President Trump is unwilling to surrender to the outcome as it’s currently projected.

CNN’s lower chyron said it all: “More world leaders have congratulated Joe Biden (on ‘winning the election’) than GOP members of the U.S. Senate.”

The election was held, the media called it, and as far as anyone is concerned—to Team Biden, that’s all folks.

Maybe it would settle if we pesky Americans wouldn’t think for ourselves. But for now, we’re still legally allowed to do so. It’s the cognitive dissonance in We The People’s minds, in fact, that is not allowing us to give President Trump permission to concede yet.

You see, he feels an obligation to us.

Unlike Joe Biden, President Trump didn’t need to take the job. He could have avoided all the horrific treatment he’s endured for the last four years if he had chosen NOT to volunteer his time and serve while simultaneously watching his net worth diminish by billions. He had a better plane, a bigger bed, and he could have chosen to not bother himself with trying to save America from those who have pledged to their deaths to radically transform her.

And now We The People who hired him have uncovered what appears to be the worst truth concerning the greatest crime committed against America—the theft of our voice. And until we have answers that this is not the case—We The People—require him to stand and fight.

There may be transparent answers to these troubling concerns. If there are, then courts should be willing to get to them and adjudicate their meaning. The goal is to demonstrate to all Americans that our elections are free, legal, honest, and transparent.

But we need answers to the following brief list of examples:

1. How, according to one analysis, are there “353 counties with 1.8 million more registered voters than residents”?

2. Why, as the Trump campaign has claimed, were so many GOP poll watchers disallowed access to observe ballots and do their job in Philadelphia while it processed hundreds of thousands of ballots?

3. Identical question for the Cobo Arena in Detroit.

4. Was it constitutional for bureaucrats and state judges to change election proceduresthat violated laws that defined election parameters?

There are a good many more questions that We The People have not had answered, but let’s begin with these.

We have a legal process to do this through. Donald Trump, as our No. 1 current public servant, is seeking the answers We The People need here.

They are fair questions.

There are—according to GOP officials—at present—roughly 11,000 Americans who are willing to go under oath (at risk of jail and perjury) to testify about what they have seen or been asked to participate in as it relates to these matters.

We need these answers investigated, whether it changes the election outcome or not—for merely the sake of confidence that our votes are being properly utilized.

The president, after all, stewards his responsibility by our consent — and thus far, it is unclear who we have rendered that consent for.

Because for President Trump, it’s never been about anything but the power of his love for this nation and the people. For Joe Biden not to be perceived as anything less than the 140 million people that cast legal votes, he must prove to us that for him, it is not just about a love for power.

We want and are now demanding transparency and an accurate counting of every legal vote.