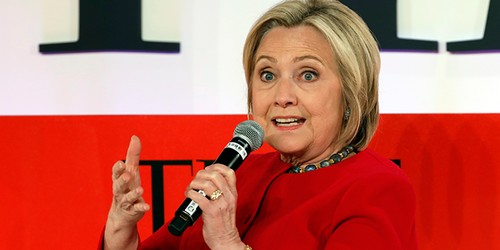 Here are the times Democrats have conceded a presidential election with grace and dignity:

OK, now on to my column.

I hope someone is recording the media’s demands that Trump supporters ACCEPT THE RESULTS OF THE ELECTION!inasmuch as the Democrats refuse to accept the results of any presidential election they lose, unless it’s a landslide, and sometimes even then.

After George W. Bush won the 2000 election — despite the media depressing Bush turnout in Florida by calling the state for Gore when polls were still open in the conservative panhandle — Gore contested the election until Dec. 13, the day after the Supreme Court called off the endless recounts (in only certain Florida counties) demanded by Gore.

The night of the court’s ruling, Laurence Tribe, the Harvard law professor who’d argued one of Gore’s cases before the court, and Ed Rendell, general chairman of the Democratic National Committee, went on TV and said it was time for Gore to concede.

Both were immediately attacked by their fellow Democrats and forced to retract their statements. Gore’s deputy campaign manager, Mark Fabiani, for example, told The New York Times that Rendell “seems to be more interested in getting his mug on TV than in loyalty.”

The next day, Gore conceded, telling his supporters he had “congratulated him on becoming the 43rd president of the United States,” adding, “while I strongly disagree with the court’s decision, I accept it.”

But that still wasn’t the end of it! Weeks later, the Congressional Black Caucus tried to prevent congressional certification of the Electoral College for Bush, raising objection after objection on the House floor.

Over the course of the next year, the Florida ballots were painstakingly recounted by an independent investigative firm at a cost of nearly a million dollars, paid for by the same media outlets currently telling you to shut up and accept the results — including The New York Times, CNN, The Washington Post and the Associated Press, along with several others.

The year-long, million-dollar recount led to this shocking conclusion: Bush still won. As the Times put it, contrary to the claims of Gore partisans, “the United States Supreme Court did not award an election to Mr. Bush that otherwise would have been won by Mr. Gore.”

And yet, to this day, Democrats claim Bush was “selected, not elected,” as so wittily put by Hillary Clinton.

Hillary was still harping on Bush’s stolen election when she ran for president in the 2008 cycle. At a 2007 primary presidential debate, she delighted the Democratic audience by remarking, “Well, I think it is a problem that Bush was elected in 2000. (APPLAUSE) I actually thought somebody else was elected in that election, but … (APPLAUSE).”

At a subsequent primary debate in 2008, Hillary said that she and President Clinton had been making great progress “until, unfortunately, the Supreme Court handedthe presidency to George Bush.”

In 2006, Michael Kinsley claimed in The New York Times that the 2000 election was “actually stolen.”

When Bush was reelected in 2004, Democrats again refused to accept the results of the election, and again attempted to block Congress’ counting of electoral votes, this time with the connivance of Sen. Barbara Boxer.

Their smoking gun? The election results in Ohio didn’t match the exit polls! If that’s not enough proof for you, and I can’t imagine why it wouldn’t be, the voting machines were manufactured by Diebold, and Diebold’s CEO was a Bush supporter. Yes, apparently, the voting machines in Ohio were rigged to flip votes for Kerry to Bush.

This crackpot theory was pushed assiduously by Vanity Fair (Michael Shnayerson in the April 2004 issue, and Christopher Hitchens in the March 2005 issue), Rolling Stone magazine (Robert F. Kennedy Jr., June 15, 2006), and in books: John Conyers’ “What Went Wrong in Ohio” — introduction by Gore Vidal — and “Was the 2004 Presidential Election Stolen?” by Steven F. Freeman and Joel Bleifuss. (You’ll have to read it to find out!)

I haven’t even mentioned the craziest of the Democrat media complex’s attacks on the results of an election: Reagan’s 489-49 electoral landslide against Jimmy Carter in 1980. (Stay tuned!)

Election results, according to Democrats:

— 1960: Kennedy wins a razor-thin victory after a surprisingly high turnout of dead voters in Texas and Illinois — FAIR ELECTION, CLEAN AS A WHISTLE!!

— 1980: Reagan won by traitorously colluding with Iran to prevent the release of American hostages before the election!

— 2004: Bush won because of Diebold hacking the voting machines in Ohio.

If that’s how we’re supposed to “accept the results of the election,” then WOW — game on!