– ‘What the government funds, it runs. With nickels go nooses. With shekels come shackles – always.’

“Government has no authority to control a church!”

Well, that’s not precisely true because if a church receives tax dollars, it is obligated to give an account for the use of that money and slavishly obey the government’s demands. If a church takes its currency, they must accept state control. With nickels go nooses. What the government funds it runs. And finally, with shekels come shackles—always.

Because of the recent crisis with the Chinese coronavirus and subsequent shutdown, some arrogant governors have ordered churches and synagogues to close, often permitting other entities to remain open. And they always permit protestors to do their thing even if it involves rioting, looting, and burning of private property.

Some churches have been permitted to meet but with restrictions as to the number, practicing social distancing, mask-wearing. But no singing, shaking hands, or hugs. However, there are no loopholes; the federal and most state constitutions forbid any control of a local church or synagogue.

Restrictions may seem reasonable during a crisis, but the First Amendment doesn’t have an asterisk explaining exceptions. If a church decides to disobey the government—local, state, or federal—then the church membership had better be sure they agree with that decision—they will not back down; they will not pay any fines; they will not close down temporarily or permanently.

If government is going to close a church, church officials should force the government tyrants to close it in full daylight with the cameras rolling.

(ANP EMERGENCY FUNDRAISER: Due to unexpected medical and emergency repair bills, please consider donating to ANP to help keep us in this ‘Info-war’ for America at this most critical time in US history as we approach the 2020 election during a time of systematic ‘big tech’ censorship and widespread Democrat corruption.) 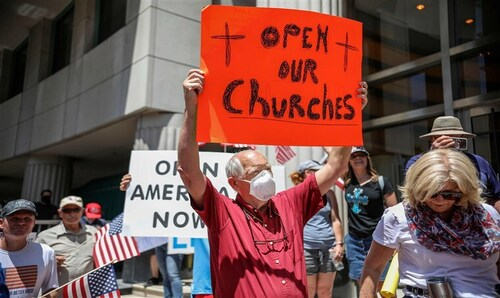 The unprincipled mayor or governor will probably campaign for reelection by saying, “I closed down those dangerous churches, and will do it again if necessary.”

If a church is closed, the members should rent a store building or meet in a home while suing the government for ten million dollars. After all, church freedom is supported by the U.S. Constitution. You can still pray for officials while you sue them for a few million to teach them a constitutional lesson.

Because of the failure of American Christians to impact culture and impress upon the Supreme Court a sense of decency and law, we are about to see the equivalent of a major war: the clash between our government and churches. When the nation and faith have been in conflict, American Christians have usually modified their faith rather than confront the authorities. Now is not the time to modify anything. It is a time for courage, commitment, and confrontation.

And jail time if necessary.

The U.S. Supreme Court declared, contrary to thousands of years of almost unanimous belief, that same-sex “marriage”was constitutional. Well, even if everyone agrees that it is acceptable as well as constitutional, it is a convoluted, controversial confrontation with a holy God who spoke authoritatively long ago. Moreover, all dedicated Christians who are more concerned about offending a sovereign God than offending pathetic pompous politicians and judges will reject that illogical, illegitimate, and illegal ruling.

Here is one citizen who will resist the first day it becomes illegal to preach that homosexuality is an abomination or that Islam is a politically protected religion. I will preach on the steps of the U.S. Supreme Court (or declare on a national television talk show) that the U.S. has overstepped its bounds and is a rogue government. Resistance may mean persecution, prosecution, and prison, so I’ll have my toothbrush with me since I may be dragged off to jail. Maybe Christians should fill the jails in civil disobedience and be obedient to the Bible. 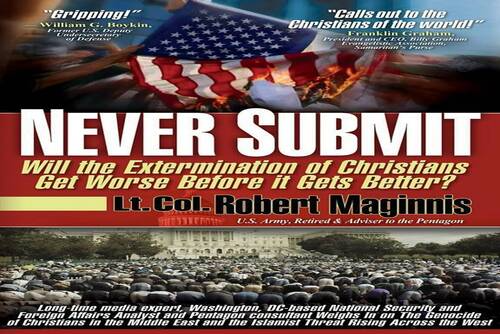 Is this generation better than present-day Christians in Red China, Red Russia, or Red Korea? Are we to be protected from persecution while our theological ancestors were not protected?

Disobedient churches may lose tax-exempt status, but we probably shouldn’t have had it anyway. Preachers and church leaders have been bowing before the golden calf of tax deduction for many years, and such obvious idolatry must stop. While no church should ever pay a tax to a government (since a sovereign never pays taxes to another sovereign), the personal tax deduction is not a biblical principle. Some churches have already repudiated their 501 (c) (3) status and continue without problems.

Many nations don’t permit citizens to deduct gifts to their churches when figuring taxes, and that policy hasn’t harmed churches. It liberates church leaders from bowing before the golden calf. Government should stop all, and I mean all tax deductions for all charitable, educational, and scientific (religious and secular) giving!

No Christian should give because of a tax advantage anyway. He or she gives because the ministry or charity is a deserving institution.

The Chinese philosopher Confucius (551-479 B.C.) and some of his disciples were expelled from one Chinese state, traveled to another, and came upon a woman weeping beside a newly dug grave. Confucius asked her why she wept, and she told him that a tiger had killed her husband, father-in-law, and now her only son. Confucius asked why she lived in such a dangerous place, and she replied, “Because there is no oppressive government here.”

Walking away, Confucius told his disciples, “My children, remember that oppressive government is worse than a tiger.” All governments are getting more and more oppressive, and while they are not as oppressive as China, North Korea, Russia, etc., the difference is in degree.

I’m not surprised at the arrogance of Canadian, British, and American politicians and judges, but I am surprised at their lack of shame. Proponents of restrictive laws strut through government buildings wearing jackboots, and Canada, Britain, and America are only a goose step away from the formation of miniature Mussolinis who will try to control all churches. Even those who reject 501(c) (3) status will not be safe for long.

An old dog may not learn new tricks, but a dedicated Christian can and should learn to do right rather than wrong. It’s a matter of the will, not the mind. Maybe modern church failure is a result of a faulty mind and a feeble will—as well as failed leaders.

Church leaders must disobey intrusive laws and fill the jails in peaceful protests. Like the Disciples in Acts, we must obey God rather than man.

Here I stand. I can do no other.

I believe someone else said that five hundred years ago.

(Dr. Don Boys is a former member of the Indiana House of Representatives who ran a large Christian school in Indianapolis and wrote columns for USA Today for 8 years. Boys authored 18 books, the most recent being Muslim Invasion: The Fuse is Burning! The eBook is available here with the printed edition (and other titles) at www.cstnews.com. Follow him on Facebook at Don Boys, Ph.D.; and visit his blog. Send a request to DBoysphd@aol.com for a free subscription to his articles, and click here to support his work with a donation.)https://www.brighteon.com/embed/f27648a9-5814-4d1e-aaac-d320e3037e6f