For most of the twentieth century, the United States tolerated a party openly dedicated to the violent overthrow of the government and the enslavement of its people. This party, the CPUSA was funded and directed by a hostile foreign government. It engaged in industrial and military espionage, trained guerrilla units on American soil, forcibly took over unions, raided their treasuries and controlled whole industries. It slandered, harassed and killed opponents; bribed police and judges and infiltrated the military. Its heinous agenda is now disguised as a fake pandemic with a survival rate of 99.8%.

Obviously, it is sanctioned by the powers that be. Communism is monopoly capitalism with the government standing in for the central bankers (Rothschilds, Rockefellers.) These bankers, who happen to be Cabalists (Satanists), seek to extend their credit monopoly to power, thought & behavior i.e. our whole lives. 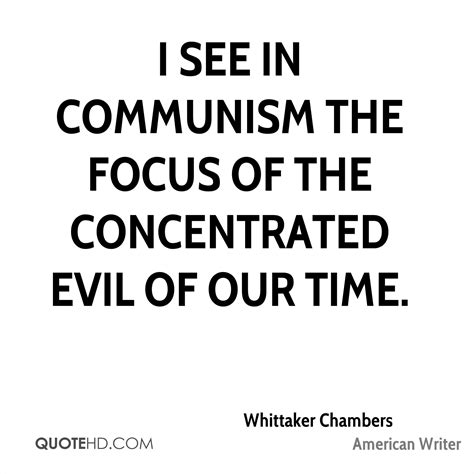 We were taught that Communism was an idealistic but discredited “working class” experiment, tried mainly in Russia and China.

This misconception duped millions of unsuspecting socialists and liberals including myself. As recently as 1999-2000, I was singing the praises of Canadian Maoist dupe Dr. Norman Bethune to my English literature class.

The Illuminati bankers created Communism to harness the working class to their program of a comprehensive world dictatorship (now known as “globalization.”) The Illuminati is a satanic cult (Jewish Cabalism.) It spawned Communism. They celebrate the same anniversary, May 1, 1776, and share the same satanic symbols.

The program took a giant step forward in 1913 when these Luciferian London-based bankers gained control over America’s finances through the passage of the Federal Reserve Act. This gave them means and incentive to step up their covert war against humanity. The two world wars were the immediate result.

Communism is a Masonic Jewish (Cabalist) movement dedicated to human degradation and enslavement, not public ownership and social justice. Of course, no one would support it if they knew the truth.

Many high-ranking former-Communists have risked their lives to alert their fellow Americans. One is Bella Dodd whose shocking book “School of Darkness” I reviewed here.

She describes how Communists morph into liberals, feminists and socialists, and myriad front groups (identifiable by the words like “human rights,” “equality,” “international” and “peace”) to divide and subvert society. 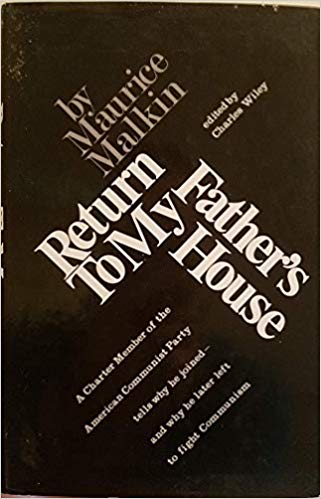 In “Return to My Father’s House” (1972), Maurice Malkin provides more revelations which I will list below. He was a leader of the American Communist Party (CPUSA) in the 1920 s and 30’s, and part of the Soviet secret service (GPU). When he left the CPUSA, he testified before Congress and suffered a stabbing attack as a result.

Malkin, a Jew, had been involved in the Bolshevik underground in Russia. His older brother Joseph, a devoted Marxist later killed by Stalin, taught him that by overthrowing the Czar, workers could “eliminate all injustices and create a heaven on earth.” All problems were due to the “class war.” The dogma of the duped went like this:

“The capitalist bourgeoisie owned everything yet the working class did all the work. The mission of the working class was to take through violence what rightly belonged to them…[Only Marxism] could relieve the human race of brutality, discrimination [i.e. anti-Semitism] and injustice, of hunger, poverty and the drudgery that filled the lives of ordinary working people everywhere.” (27-29)

Malkin immigrated to New York and took the ersatz religion of a workers’ heaven on earth with him. Lev Bronstein (Leon Trotsky), a close family friend taught him “bullets, not ballots would liberate the workers.” (50)

His brother Joseph was one of the 150-175 mostly Jewish radicals who left for Russia with Trotsky in 1917 aboard the S.S. Christiansfjord. Banker Jacob Schiff financed them.

The ship was stopped in Halifax and the occupants interned. Despite (or because of) Trotsky’s public declaration that they “were going home to Russia to dig the grave of capitalism,” Woodrow Wilson intervened on their behalf. Rothschild agent Edward House controlled Wilson.

The Illuminati bankers despise free enterprise because it involves competition and market forces. It allows other people the opportunity to prosper and be free. They favor monopoly or state capitalism and the abolition of private property because then they own or control everything and everyone. Of course, this is disguised as “public ownership” but they control the government and its wealth.

Thus, for most of the last century, the United States has tolerated a party openly dedicated to the violent overthrow of the US government and the enslavement of its people. Yet all the while, our highest elected officials defended it as a harmless idealistic enterprise. “Some of my best friends are Communists,” FDR famously said. 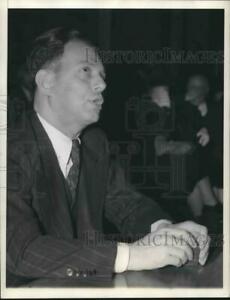 (Malkin testified before the Dies Committee in 1939)

Malkin reports that Adlai Stephenson (as Assistant to Navy Secretary Knox) sabotaged efforts to curtail Communist activities. In 1956, Eisenhower “liquidated all anti-subversive sections in the Immigration Dept and halted deportation and prosecution of known alien Communists. [He] stopped prosecutions of Communists under the Smith Act, giving the Party a chance to regroup and organize new mass fronts.” (191)

The Liberal media marginalized and ridiculed as “right wing fanatics” people who warned of the Communist threat. To this day, people don’t accept that the Rosenbergs were indeed Russian spies. The House Un-American Activities Committee is portrayed as a “witch hunt.”

Communism is nothing but a sugarcoated goon squad for the Illuminati bankers. Malkin reports that the CPUSA even had a formal alliance with the mafia, another Masonic sect.

Moscow provided the Mafia with heroin to sell in the USA. The Mafia “lent” money to the Communist Party, provided muscle for taking over the labor movement, and disposed of enemies or members who woke up. (One Communist leader, Juliet Stuart Poyntz, was kidnapped, killed at sea and thrown overboard.) The Mafia also distributed counterfeit US dollars printed in Moscow.

Following Stalin’s example, American Communists robbed banks, calling it “expropriation.” In his book, “Left-Wing Communism” (Vol. 30) Lenin counselled: “Communists are to be ready to cheat, lie, perjure and do everything possible to gain their ends.” Thus, when evidence of their skulduggery surfaced, it was little matter to denounce it as a “forgery” and smear the messenger.

The Communist Party infiltrated the Negro Civil Rights movement and got Ralph Abernathy and Martin Luther King to work with their Moscow-trained Negro mercenaries. W.E.B. DuBois and Ralph Bunche were among their “Black” front men but they hardly had any Black followers. American Negroes were too patriotic.

“The Reds realized that the only way to weaken our country is by dividing it through anarchy and chaos,” Malkin writes. 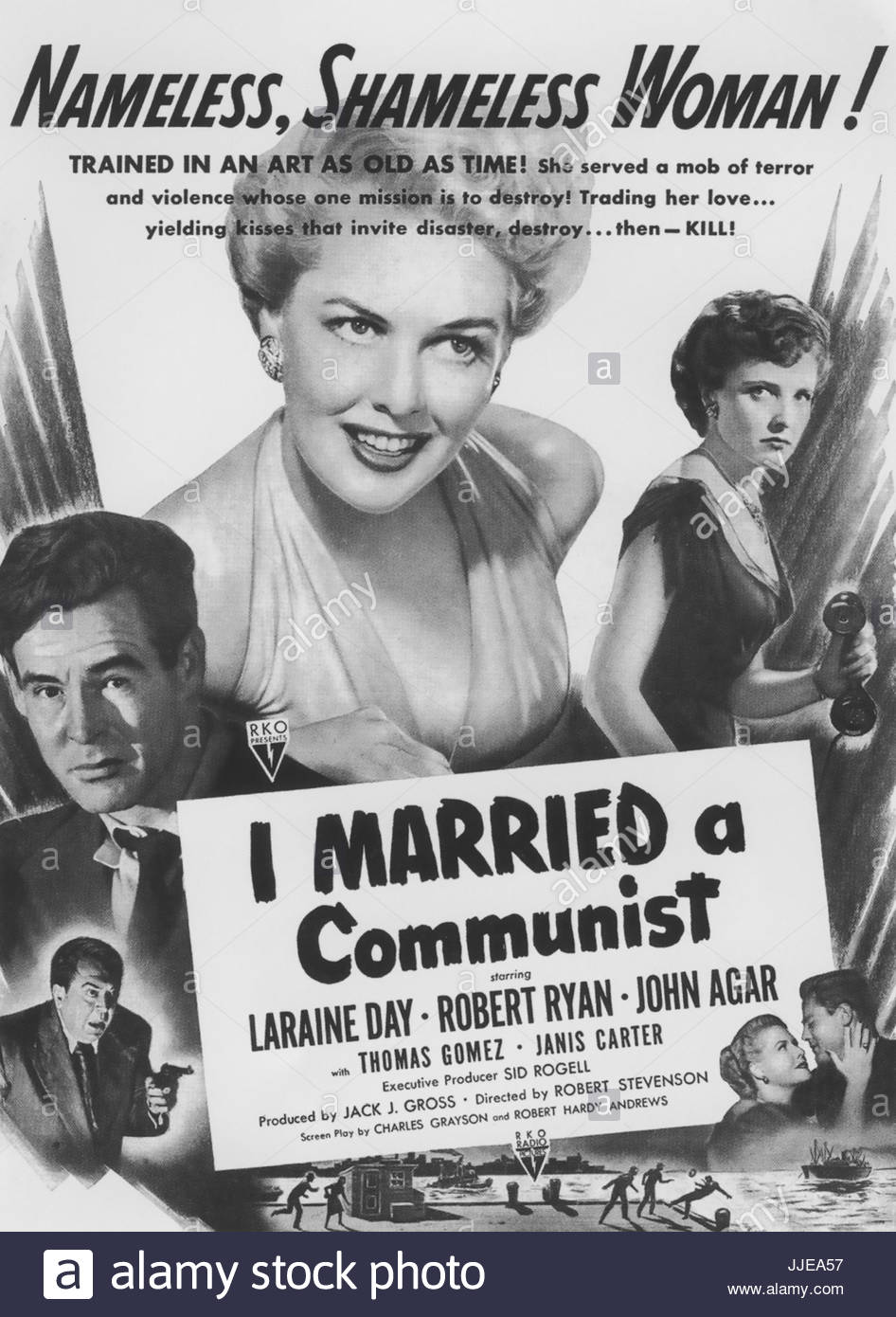 They had more luck with women. The Communist attitude to women is instructive since second-wave feminism is Communist in origin. Feminism is recycled “class war” adjusted for gender.

Young female members were used on the waterfront to recruit sailors and longshoremen and bring them to party functions. “Girls would always be found in the Communist summer camps doing the party’s bidding plus offering a little enjoyment on the side. The Party believes that the only laws and morals are Communist morals. ….Communists do not believe in family institutions or morals so everything is free.” (239)

The Communists had a department dedicated to “the destruction of the morale of the American people by undermining their faith in their moral and social patterns.” (71) You can bet that something like this is behind same-sex marriage and transgender “rights.”

When Hitler and Stalin made a pact in 1939, Malkin realized there was little difference between the two and quit the Party. He devoted the rest of his life to defending American institutions, working for the U.S. Dept. of Justice from 1948-1956. He realized belatedly that his religious father’s condemnations of Communism were correct, hence the title of the book.

Once, a lesbian running for the head of my English Department gave a long speech saying she believed in “peace.” What did this have to do with English literature? “Peace” is code for the end of resistance to the NWO, i.e. Communist global tyranny. She was elected Chair of the Department. 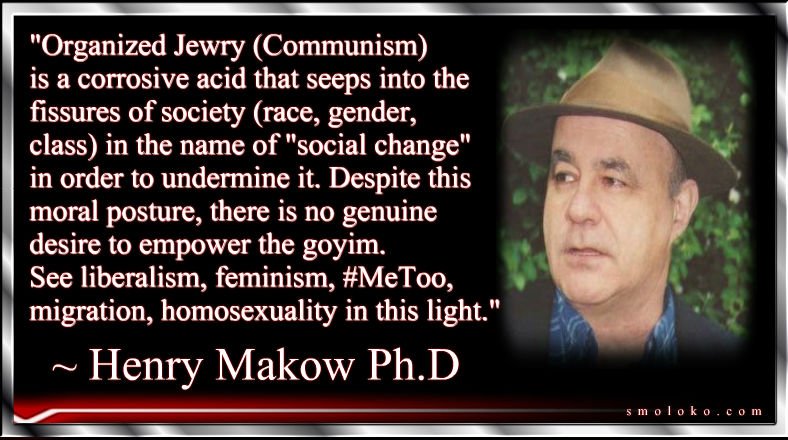 (Satanism, illuminism, Cabalism, Freemasonry, and Communism are identical. The goal of Freemasonry is the triumph of Communism.)

The New World Order is full of empty platitudes about “diversity,” “peace,” “tolerance” and “human rights.” But in light of the NWO’s murderous Communist (and Fascist) pedigree, these platitudes are not convincing.

Western elites (including the intelligentsia) suffer from a peculiar death wish. We would be slaves already were it not for the fact that ordinary Americans own firearms. This, the Internet, and the inherent self-destructiveness of evil are my main reasons for hope.

————
Related:  Makow – Banking System is Key to Understanding Our Servitude

Makow- What is Communism?