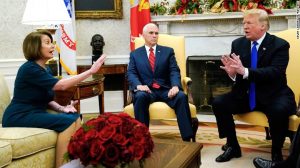 Video: Pelosi and Schumer, let’s do this in private.

Obesity rate at all time  high!!!

Horowitz: The sorry socialist state of the farm bill.

Walter Williams: When racism is acceptable.

34,262 documented Islamic terror attacks around the world since 9/11.

Clancy: Abolish the Electoral College and Senate, Why not tear up the Constitution?

Lifson: General Flynn set up by FBI, told no lawyer needed when FBI sprang its trap.

Davidson: The transgender movement is not interested in compromise.

Google approves app for Muslims to report people for blasphemy

Washington Compost’s Jennifer Rubin runs away when asked how she is a conservative.

Hall: The tyranny of the judiciary and what to do about it.

Showalter: Hillary, Huma, Kerry all back in fine form dancing with the Indian billionaire set.

Maynard: The Fallacy of the Black Lives Matter movement.

Hellner: People who supported putting Clinton’s back in White House have no business discussing law and order.

Farber: Why we need a universal draft.

Kellyanne: Ocasio-Cortez doesn’t know much about anything.

Shapiro: The mob gets Kevin Hart.

Spencer: Blasphemy?  Google has an app for that.

Watkins Jr.: States Bills of Rights have the true protections.

Payton: How Mark Twain championed self government through humor and realism.

Fazio: Now that the Supreme Court isn’t their puppet, liberals want to destroy it.

Newcombe: Did missionary die from altruism or arrogance?