“Those who would give up essential liberty to purchase a little temporary safety, deserve neither liberty nor safety.”
— Benjamin Franklin

Yesterday, May 1st, 2020, was a date that began a massive movement to overturn 103 years of worldwide tyranny by Communism.  It began in 1917, when the Bolsheviks in Russia, funded by Jacob Schiff and the Rothschilds, murdered the Tsar’s family, commanded by the mysterious cabal of globalist bankers.

These globalist bankers took over China under Mao, have controlled America’s money since 1913, with the creation of the Federal Reserve and the income tax, and have been responsible for every single war from World War 1 on, as they are adept at cooking up circumstances that their media propaganda hypes into a war.

The Democrat party has been controlled by these globalist bankers since 1912, when they got Wilson elected.  Part of their strategy was to convince minorities that Whitey is the worst oppressor in world history, and that he invented slavery.  This hilarious idea ignores that the very globalist bankers who are blaming American whitey for world slavery, have been enslaving humans for centuries,  were behind most of the African slave trade with their ownership of the  British East India Company, still do with human trafficking, and have enslaved the entire nation with the income tax in 1913.  However, this isn’t enough for them.  Greedy for more power and wealth, they crashed the economy by deliberately releasing the Coronavirus in the only nation on earth America could not investigate, the 2nd largest military and economy, and the largest Communist nation in world history, China.

Today’s Democrat party is essentially Communist.   That means that the ideology and shadow leaders that have murdered 100 million in the past century are the same ideology, stopped only by the Constitution, which Democrats hate and constantly attack,  as today’s Democrat party.  Of course, many Democrats, who haven’t read a single speech by Hitler, are trained to think that Germany’s opposition to globalist bankers, and ‘Germany First’ program, along with it’s feverish defiance of Communism, are wicked and evil.   For those who are convinced all they need to know about World War 2 is taught in schools, in the media, and from Google searches, you are wrong, I”m afraid, as I learned this year.  As for the Holocaust,  ask yourself, how was the term ‘6 million Jews murdered in the Holocaust’, used over 230 times in major media from 1900-1939, BEFORE WORLD WAR 2?  Is the Holocaust a Hoax?  You tell me, after examining all the evidence.  Also, make sure you read Sigmund Freud’s (a Jew) nephew’s (Edward Bernay) book, “Propaganda”.  Make sure you also read the Jew Walter Lippmann’s book, ‘Public Opinion’.  Ask yourself why the NY Times is owned by the Jewish Sulzberger family, and the Washington Post by the Jewish Graham family, before Rothschild backed Bezos’s purchase of it?  Why were 25 of the most powerful newspaper’s in America purchased by the Rothschild backed Morgan in the early 1900’s?  When you control the media. schools, and tech companies, and the largely J*wish globalist bankers do, you control the minds of tens of millions.

Let’s be clear, the Jewish globalist bankers behind Communism, and who run the Democrat AND REPUBLICAN PARTY, will not tolerate any criticism, and will immediately kick up tremendous cries of anti-semitism, fascism, Nazism, and the Holocaust.  If you speak against the bankers too loudly, or interfere with their plans, you can have nasty accidents or deaths, just ask James Forrestal, General Patton, and the John Birch Founder, Larry McDonald, who went down with Kal OO7.   The vast majority of Jews are kind, gentle, and Godly believers in the Torah, but the globalist bankers are a vicious breed of Jew, who have been robbing America blind ever since they seized control of America with the creation of the Federal Reserve in 1913.  These Globalist Banker Jews are the ones Luther was talking about in his book, “The Jews and their Lies”.

So, yesterday’s rally at the Capitol, against Communist tyranny was a remarkable feat.  Here are pictures from the rally, and then we will detail what happened. 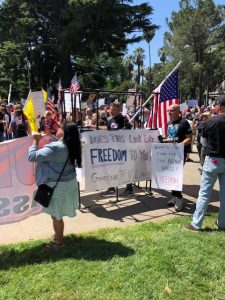 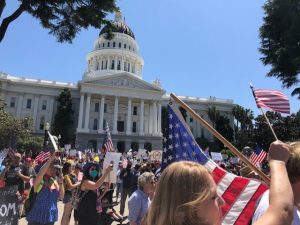 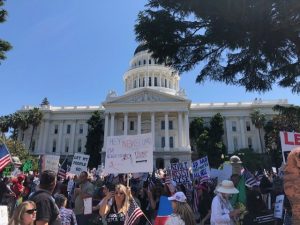 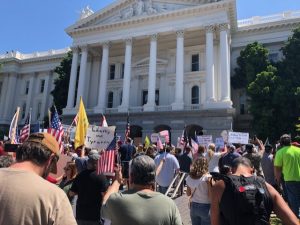 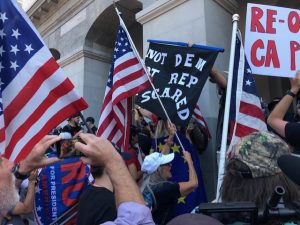 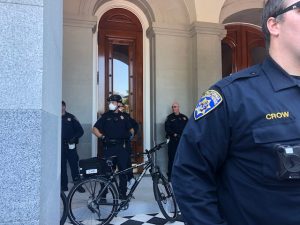 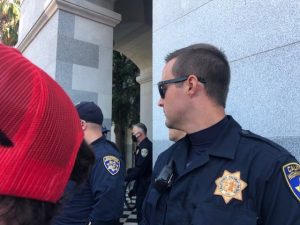 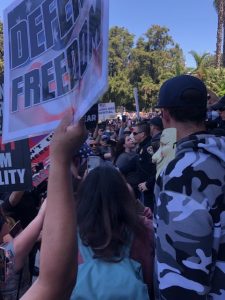 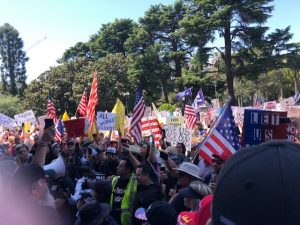 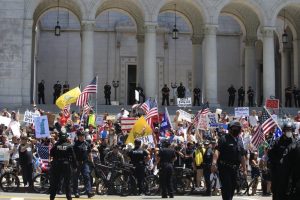 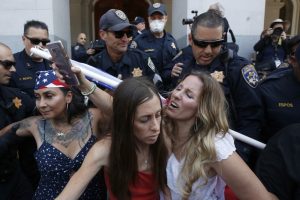 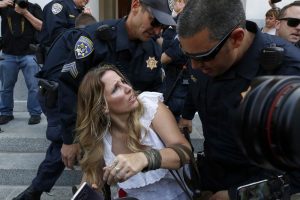 Governor Gavin Newsom, a Communist Tyrant, said that only 500 people had a ‘permit’ to assemble at the State Capitol.  First of all, the First Amendment gives American’s five rights.

“Congress shall make no law respecting an establishment of religion, or prohibiting the free exercise thereof; or abridging the freedom of speech, or of the press; or the right of the people peaceably to assemble, and to petition the Government for a redress of grievances.”

There are no exceptions for when those rights are granted.  No government is permitted to limit the number or place where Americans can assemble to protest. We have 40 million Californian’s, and less than 1,300, according to Johns Hopkins, have allegedly died from this Coronavirus since December, over four months ago.  We are shutting down the state over that?  That’s ridiculous, and no rational person agrees with it.  Newsom alleged that the CHP gave an order for the crowd to back down.  I was on the top steps of the Capitol, letting CHP know  that they had a duty to uphold the Constitution.  They must choose, do they defend the Constitution or tyranny, and for those who choose wrong, woe to them.  I never heard the order.  Suddenly, the CHP officers took out their batons, and began moving down the steps.  As a Taxpayer, an American Citizen by birth, and a military veteran, I have every right to protest at the Capitol, and so  I wasn’t backing down and refused to give way.  Suddenly, my hands were yanked to my back, I was dragged behind the CHP line, and had zip ties placed around my wrists and was handcuffed.  I was taken into the parking garage of the Capitol, surrounded by nice shiny cars of wealthy and corrupt politicians, and held for 2-3 hours. The CHP officers were polite and courteous, and a few were exceptionally honorable in their dealings with us patriot protesters, however, the underlying issue is, they have no right to obstruct American Citizen’s right to  protest in public.  It was sad to see the majority of the 32 protesters taken into custody were women, who were fighting to defend their children against this tyranny.  Also, it was sad that the CHP pushed over 1,000 protesters from the Capitol building to the street and only 32 were arrested.  Civil Disobedience should have been practiced, and there should have been at least 500 arrests, however, none of us conservatives expected this treatment from the CHP, whom many of us have staunchly defended against criminals.  We were unprepared, though we will not be next time.

It was great to see so many patriots assembled in one place.  The signs were truly awesome.  I have never, in my life, seen so many signs about tyranny, and how it would be resisted.  Considering the blood of the 100 million murdered by Communists in Russia and China, all innocent, and  the hundreds of thousands of American young men, who marched off to war from World War 1 on, hoping to fight for America, when in reality they were used for the selfish ambitions of globalist bankers, it is time to resist tyranny.  ‘Tyranny = War’ read one sign, and we are about to witness the complete collapse of the globalist bankers, their media, their schools, their tech companies, Communist China, the U.N., the W.H.O., and a host of victim groups, NGO’s (non-governmental organizations), and other groups.  Then, when America restores marriage and the Christian Church, the two organizations that made America great in 1776, which are under vicious attack from globalist bankers, we shall have a peace and prosperity this nation has not had for over a century.

‘Yea though I walk through the Valley of the Shadow of Death, I will fear no Evil, for thou art with me, thy rod and thy staff, they comfort me’

For those who believe I’m an anti-semite, and are brainwashed by the Cultural Marxists, King David was a real Jew, not a greedy globalist Jewish banker, whom I admire, as a true man of God.

“All tyranny needs to gain a foothold is for people of good conscience to remain silent.”
—Thomas Jefferson

“Enlighten the people, generally, and tyranny and oppressions of body and mind will vanish like spirits at the dawn of day.”
—Thomas Jefferson

“Experience hath shewn, that even under the best forms of government those entrusted with power have, in time, and by slow operations, perverted it into tyranny.”
—Thomas Jefferson

“Government is not reason, it is not eloquence, it is force; like fire, a troublesome servant and a fearful master. Never for a moment should it be left to irresponsible action.”
—George Washington

“Overgrown military establishments are under any form of government inauspicious to liberty, and are to be regarded as particularly hostile to liberty.”
—George Washington

“If the freedom of speech is taken away then dumb and silent we may be led, like sheep to the slaughter.”
—George Washington

“The means of defense against a foreign danger historically have become the instruments of tyranny at home.”
—James Madison

“If tyranny and oppression come to this land, it will be under the guise of fighting a foreign enemy.”
—James Madison

“I believe there are more instances of the abridgement of freedom of the people by gradual and silent encroachments by those in power than by violent and sudden usurpations. … The means of defense against foreign danger historically have become the instruments of tyranny at home..If tyranny and oppression come to this land, it will be under the guise of fighting a foreign enemy.” President James Madison

“When once a republic is corrupted, there is no possibility of remedying any of the growing evils but by removing the corruption and restoring its lost principles; every other correction is either useless or a new evil.”
— Thomas Jefferson

“It is the religion of ignorance that tyranny begins.”
—Benjamin Franklin

“Rebellion to tyrants is obedience to God”
—Benjamin Franklin

“It is the first responsibility of every citizen to question authority.”
—Benjamin Franklin

“It is the duty of the patriot to protect its country from its government.”
—Thomas Paine

3 Replies to “Tyranny in Sacramento”