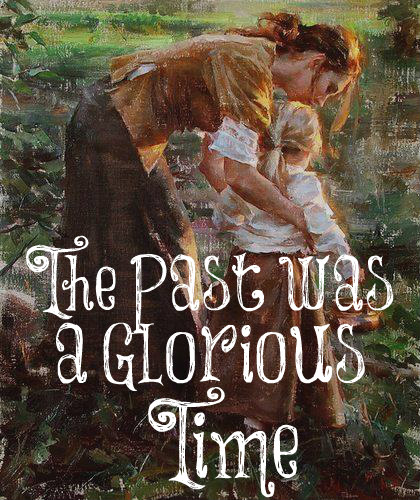 There has always been evil in this world since the Fall. There’s always been evil in America (like slavery) and hard times, but now it is evil all the way through. Feminism, the Internet, and Hollywood have corrupted deeply. Even many of the churches have grown lukewarm. They are afraid to teach the truth, hence, worldliness has taken over the churches.

Sodom and Gomorrah didn’t just start out as evil. No, the evil grew until the cities were destroyed, and all great nations are eventually destroyed from within. Please, read Romans 1. It explains clearly how evil begins and what the end result is. Men “hold the truth in unrighteousness” and God eventually turns them over to a reprobate mind.

Here is a comment from a man from this post in response to a woman trying to say that the past was just as bad as these days.

The past definitely was a glorious time. You only need to read “Little House on the Prairie,” “Little Women,” Dickens, Tolstoy, or any other period literature which was largely representative of life back then.

The out of wedlock birth rate in 1947 was three percent. Today it’s 40 percent. Not to mention 110 million Americans have an STD. They had no welfare, income tax, or gun regulations in 1910, and the fertility rate in 1957 was 3.7. Today it’s 1.7. Replacement fertility rate is 2.1. Millions of babies have been slaughtered in their mothers’ wombs and with divorce and fornication completely acceptable, single motherhood has skyrocketed.

As for children, even the poor ones were taught morality, which is why poor children like Carnegie and Rockefeller had a chance to work their way up to become anything. Unfortunately, their power corrupted them. Now, most children spend their childhoods in daycare and then in the Marxist school system.

Twenty five percent of women today are on psychotropic drugs, and women are exploited, enslaved, abused, and harassed at higher rates today than ever before in American history. The Left will lie and say this stuff always happened. It wasn’t reported before, but that’s completely false. Simply look at what Weinstein got away with doing to some of the most powerful and wealthy women on earth today, and consider, if he got away with doing that to those women, what is happening to the common woman who isn’t as wealthy or famous?

Because that, when they knew God, they glorified him not as God, neither were thankful; but became vain in their imaginations, and their foolish heart was darkened. Professing themselves to be wise, they became fools.
Romans 1:21,22

The Past was a Glorious Time