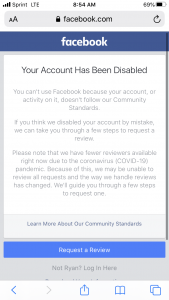 This is a blatant crime, and they do it to millions of conservatives, while publicly lying and saying they have no bias and do not censor. Section 230 gives them the privileges, which are vast, of being an open platform.  This specified that they must not censor, which they do anyways.  The Facebook “Community Standards” is based on no recognizable moral code in human history, and has some of the most hypocritical and corrupt standards imaginable.  Profanity and pornography are all over Facebook, but mention uncomfortable conservative truths and you are blocked.  Why is it social media companies have armies of pawns to regulate speech, but no one to answer a phone and address customer complaints?  Because it’s not designed for customers, it’s designed to steal from us, spy on us, and shape our thinking, as secretly as possible.   Can’t let the Goyim know they are being duped, that’s bad for business.

In reality the social media companies are publishers. Once that is cleared up they can be sued into oblivion.

Anyhow, some Facebook censor must have fallen asleep earlier this morning, because after banning my phone number for two years, inexplicably, I was allowed on.

It was a rip-roaring good time.  For about eight glorious hours, until about 9 AM, I went to the usual political gathering homes, dominated by deceived Democrat partisans, and raised an uproar, as the truth always tends to do among those who are living a lie.

Its astonishing that liberal pawns, who never attend city council meetings, get on Facebook and become the bravest and most courageous individuals you ever did see.  Had one woman who begins began with the typical “Rayciss” and “sexist” Cultural Marxist nonsense, then proceeded to inform me she and her friends were all laughing at me, as if their absurd ridicule was supposed to deter me.  When none of that worked, she tried cute memes. And when that didn’t work, amidst frantically reporting me to Facebook censors, she began stuttering about how I needed to take my meds, and how I had an elevator that didn’t reach the top floor.  When I politely informed her I never used drugs, what was her drug use like, the expected brush off happened, accompanied with more flurries of recommendations to look into my mental wellness.  It’s gaslighting at its best, done by trained professionals.

I then visited our corrupt Democrat Congressman Mike Thompson’s page, where I posted the correct information on the corona virus hoax.   He actually, or a staffer, personally responded to me and others telling us, without any proof, that our information was incorrect, and to please stop.  I responded by informing him he was a corrupt Communist Fraud.

One of his supporters was a Ruth Bader Ginsburg worshiper, and when I informed her that her idol, by the Bible’s standards. did not go to heaven, she went ballistic, and frantically reported me to censors.  The poor censors, no doubt getting hundreds of requests to censor me from terrified Democrats, who have massive allergies to the truth, finally complied.  I’m likely to never be allowed on Facebook again.

This tech censorship needs to end. Their Lying and censorship is not harmless at all, it is designed to indoctrinate America and to prepare us for our impending slavery.