It’s very obvious that the Democrat party is the party of Satan.  No Christian can be a Democrat, vote Democrat, or support Democrats, and go to heaven without repenting.

That is not my opinion, the Christian Bible, God, and Jesus all agree.

[9] Know ye not that the unrighteous shall not inherit the kingdom of God? Be not deceived: neither fornicators, nor idolaters, nor adulterers, nor effeminate, nor abusers of themselves with mankind,
[10] Nor thieves, nor covetous, nor drunkards, nor revilers, nor extortioners, shall inherit the kingdom of God.
[11] And such were some of you: but ye are washed, but ye are sanctified, but ye are justified in the name of the Lord Jesus, and by the Spirit of our God.

[16] This I say then, Walk in the Spirit, and ye shall not fulfill the lust of the flesh.
[17] For the flesh lusteth against the Spirit, and the Spirit against the flesh: and these are contrary the one to the other: so that ye cannot do the things that ye would.
[18] But if ye be led of the Spirit, ye are not under the law.
[19] Now the works of the flesh are manifest, which are these; Adultery, fornication, uncleanness, lasciviousness,
[20] Idolatry, witchcraft, hatred, variance, emulations, wrath, strife, seditions, heresies,
[21] Envyings, murders, drunkenness, revellings, and such like: of the which I tell you before, as I have also told you in time past, that they which do such things shall not inherit the kingdom of God.

While Trump is far superior to the Democrats, he is far removed from being a Biblical, Constitutional leader.  As it stands, I will be voting for someone other than Trump for President.  I refuse to get caught up in the “but if you don’t vote for Trump you support Democrats” fallacious argument.  If every American voted for Biblical, Constitutional candidates, no Democrat would be in office, 80% of the Republicans wouldn’t be in office, and Trump wouldn’t have a prayer of being elected for anything.

Trump has some some good, but his crude and profane style has unnecessarily alienated many.  There is no excuse for this, as America’s Founders had moral authority and decorum, and they despised the lewd vulgarity Trump has always been known for.

Trump is living in adultery, as the Bible is very clear, in Matt 19:9, that, regardless of whether one was married before or after they became a Christian, the only reason for remarriage is adultery of ones spouse (the guilty party is never free to remarry, they can only reconcile, or live celibate for the rest of their lives, unless the innocent spouse precedes them in death), or being widowed.  Clearly Trump does not qualify for remarriage, yet, he’s been remarried twice.  In Gods eyes, every time he has sex with Melania, it’s adultery.  I really like Trump and what he’s done, but, Gods standards are unchanging and eternal. Of course, lukewarm Christians will have a temper tantrum over this, as they are used to the fairy tale that everyone is going to heaven. 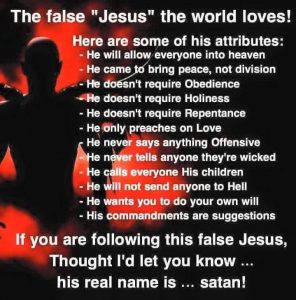 It is God alone who can restore America, with or without Donald Trump.

America is in such terrible straits because we have never had a more Biblically unaware and Biblically disobedient nation in our entire history.

Let us turn back to the Creator, and not worship the Created.

Too many Christians are convinced Trump is a Savior of sorts, and they refuse to hold him accountable.  If he’s a Godly leader, he ought to publicly be a terror to evil works like pornography, homosexuality, contraception, and abortion, and he is not.  He also ought to be calling out the evil bankers behind the Federal Reserve, instead, his administration is full of their pawns, and he’s adding unprecedented levels of debt to the national debt.  Yes, the virus was unexpected, but the bankers concocted it, as they cooked up the crash of 1929, leading to the Great Depression, and   World War 2.

12 I, even I, am he that comforteth you: who art thou, that thou shouldest be afraid of a man that shall die, and of the son of man which shall be made as grass;
[13] And forgettest the LORD thy maker, that hath stretched forth the heavens, and laid the foundations of the earth; and hast feared continually every day because of the fury of the oppressor, as if he were ready to destroy? and where is the fury of the oppressor?