“A grassroots and organic movement needs to be assembled to fight back against the rising tide of totalitarianism. Each of us can only do our own small part, but together, in concert, I believe we can stop medical tyranny and the Reset in its tracks and even reverse the damage done.”

We Will Not Comply: A Campaign Against Medical Tyranny

by Brandon Smith(abridged by henrymakow.com)

Globalists like Gideon Lichfield at MIT told us exactly what the plan was in March of 2020 in an article tiled ‘We’re Not Going Back To Normal’. They admit that the goal has always been to institute vaccine passport restrictions that will last for many years to come, if not forever. From the article:
“Ultimately, however, I predict that we’ll restore the ability to socialize safely by developing more sophisticated ways to identify who is a disease risk and who isn’t, and discriminating–legally–against those who are.

…one can imagine a world in which, to get on a flight, perhaps you’ll have to be signed up to a service that tracks your movements via your phone. The airline wouldn’t be able to see where you’d gone, but it would get an alert if you’d been close to known infected people or disease hot spots. There’d be similar requirements at the entrance to large venues, government buildings, or public transport hubs. There would be temperature scanners everywhere, and your workplace might demand you wear a monitor that tracks your temperature or other vital signs. Where nightclubs ask for proof of age, in future they might ask for proof of immunity–an identity card or some kind of digital verification via your phone, showing you’ve already recovered from or been vaccinated against the latest virus strains.”

I say to you that this is the classic philosophy of almost every semi-human monster that has ever lived. This is the ideology of narcissistic sociopaths. The religion of soulless robots. Some of the greatest evils known to mankind have been committed in the name of “the greater good of the greater number”. This mantra cannot be tolerated under any circumstance; it cannot be allowed to infect our nation and supplant our deeper values. Because if it does, we may find ourselves slaves to the system for a very long time.

As I have been warning they would do for the past year, multiple governments are keeping pandemic lockdowns and restrictions in place or they are bringing them back (in the case of the US), and it should be clear to everyone that this circular process of medical tyranny is not going to end. It is never meant to end. The goal of the establishment, of globalists and governments, is to keep the restrictions in place indefinitely.

The mainstream media has consistently attacked the claim that governments would enforce vaccine passports as conspiracy theory. Now they are openly admitting that the plan is to institute vaccine passports and they are vigorously defending it. They are discussing with avid fervor how they might be able to FORCE or compel each and every person to take the jab, even if they don’t want it and even if the jab serves no purpose.

PASSPORTS ARE THE KEY TO EVERYTHING

I have my own suspicions of the jab and its true purpose and safety, but lets not forget that the jab is at the very least a stepping stone to the vaccine passports. The passports are the key to everything. Without the passports, medical tyranny cannot be established. Without the passports they have no leverage over the population to dictate the fundamental aspects of our lives. They NEED the passports in order to get their “Great Reset”. Without a “papers please” social credit system in place, their Reset will fall apart.
It is therefore imperative above all else that the vaccine passports are never allowed to take root. The program must be stopped and destroyed.

I am not a major “influencer” in conservative or liberty movement circles. I am not a big YouTube personality or a media Juggernaut. I have no big business backing or deep pockets to spur a national campaign. I’m not particularly fond of public speaking though I have learned to deal with it. I am just a writer with a love for the values of freedom, the values of reason and in many cases the values of faith that give humanity meaning. And, what I see is a deadly serious need; a need for an organized front line against the storm of dictatorship that is on our doorstep.

What I suggest is simple – A national campaign against the medical passports. Globalists, socialists and corporatists understand the concept of “pressure” and how to apply it to get what they want. I believe we must also learn how to wield pressure in the opposite direction. It is not enough to sit in our homes isolated from each other content in the knowledge that millions of other people feel the same way we do. We must also take action.
RESISTANCE

We must send a message: WE WILL NOT COMPLY!
I’m not sure that any single person out there has the “clout” to drive this campaign alone, and it’s probably better that way. What is required is a mass movement united by principles, not a movement tangled together by a cult of personality.

There are many ways to do this, from simple actions to more complex strategies. Any liberty activist can send a message through signs, bumper stickers, advertisements, billboards, etc., reminding the establishment that we will refuse to submit to the jab or the vaccine passports under any circumstances. They need to understand that there is nothing they can do that will make us change our minds. Nothing. 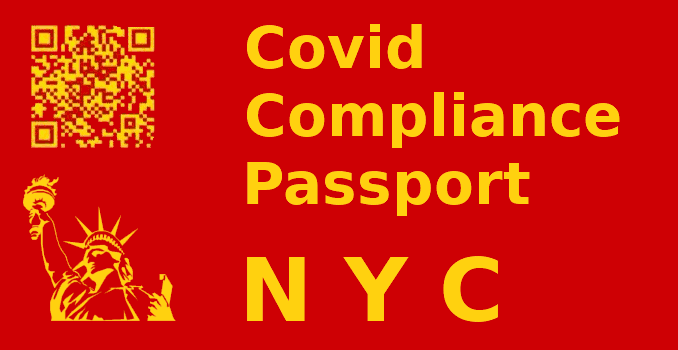 The primary strategy of the covid cult has been to work with larger corporations to demand proof of vaccination (vaccine passports). We must let these companies know in no uncertain terms that we will cut off all consumer support for their businesses. We will not work for them and we will not give them a penny of our money. Instead, we will approach smaller local businesses, find out if they are a part of the ‘We Will Not Comply’ campaign, and if they are, then we will support them instead. It’s time to teach these corporations a lesson and put them out of commission by removing our money and our labor from their pockets.

The next strategy by the establishment has been to mandate vaccinations for government workers. Again, mass walkouts are the answer. Let them sweat by losing half of their workforce. And then maybe take them to court. Bury them in lawsuits while strangling their ability to operate.

Eventually, the Biden Administration is going to attempt federal level lockdowns and vaccine controls. It’s only a matter of time. This is where organization is vital. Counties and states with majority conservatives and liberty advocates must band together and once again say “We Will Not Comply”. If your state government is on board and defying Biden then that will be extra helpful, but do not make the mistake of assuming that state governments alone will protect you. You must be organized at a local level, with your community and local businesses ready to make a stand. This must start now, before it is too late.

Finally, if the covid cult decides to pursue direct force as an option, we must be ready to fight back. Without local organization at minimum, defending ourselves will be difficult or impossible. This means bringing back an old standby of the Founding Fathers: The militia.

There is a time for preparation and a time for taking risks. Without risk there can be no freedom. We are quickly approaching a time in which gamblers and true believers could decide the fate of the world for the next century. A grassroots and organic movement needs to be assembled to fight back against the rising tide of totalitarianism. Each of us can only do our own small part, but together, in concert, I believe we can stop medical tyranny and the Reset in its tracks and even reverse the damage done.

I believe we are living here now at this crossroads for a reason. I believe we are meant to be here; that we are being given a chance to be the right people in the right place at the right time. I believe that we can end this evil, but only if we dare to try. It begins with one simple step: Telling the world “We Will Not Comply!”  And then, we must follow through on our promise.

If you would like to support the work that Alt-Market does while also receiving content on advanced tactics for defeating the globalist agenda, subscribe to our exclusive newsletter The Wild Bunch Dispatch. Learn more about it HERE.