13 Part Series on Antietam on bottom.

Virgil: The President controversial policy towards Russia: The Good guys risk losing if the bad guys are united- Part 1.

Hirschauer: The President deserves praise for his deregulatory agenda.

MassResistance to show up in Dixon to protest homosexual mafia’s crucifixion attempts on Vice Mayor.

Jeannine Pirro on View episode: ‘This isn’t about me’, ‘A microcosm of what’s going on in our country’.

Trump: Looks more and more like Presidential campaign was ‘illegally spied on by Feds’.

Callahan: Musk is a total fraud.

Arlandson: The Protestant Work ethic and the Founding of America. 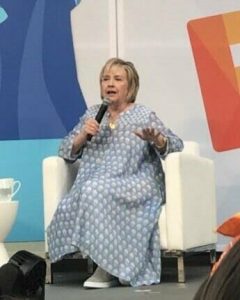 Hillary and the Housecoat

Showalter: Is that a catheter bag under Hillary’s loose clothing?

Trump tweets that his ‘campaign was illegally being spied upon’.

Ahistorical dimwit Ocasio-Cortez: Too many men in Congress.

McMillan: TDS: The symptom, not the disease.

Knight: The Predictability of Barrack Obama.

Hunter: Liberals get a dose of their own medicine.

Bialosky: FBI you don’t have that right.

Mark Levin: Progressivism is a form of tyranny.

How the Peloponnesian War brought Athens Golden Age to an end.

Feldman: To Democrats, the World is Altgeld Gardens.

Voshell: Why the left resists a reconciliation with Russia.

O’Brien: Gavin Who? Media not mining for gold in California.

‘The Sandlot’ celebrates myth and reminds us to keep the past alive.

Horowitz: Teachers and coaches should quit NEA in wake of Kaepernick award.

Alleged cop-killer should have been in jail due to drug charges.

Sodomites go on strike in Israel, march in Tel Aviv.  Angry that they can’t adopt children.  Note: Homosexual pedophilia rates are vastly higher than heterosexual.  Pro-gay publications making lots of money off homosexuality being normalized, like universities and liberal publications such as Huffington Post, The Atlantic, among others, won’t acknowledge this.

Will New Jersey send a Republican to the Senate.

Man dies after throat rots away from Cocaine use.

Why is Generation Z more open to faith?

More ‘wisdom’ from Stelter: ‘Too many’ journalists fell for ‘Trump’s cleanup act’ after Putin presser.

RINO Rubio: FBI did nothing wrong by spying on Carter Page.

Showalter: Cuba’s Communists taking a page from Bernie and Obama about really being socialists.

SCHAEFFER: ANTIETAM – PART 7: ‘All The Plans Of The Rebels’

SCHAEFFER: ANTIETAM – PART 10: Into The Cornfield