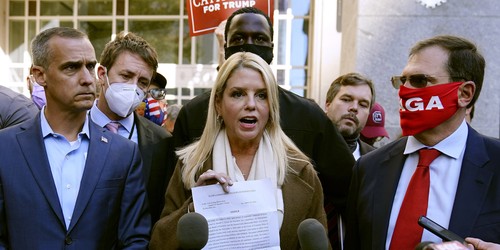 For Republicans, the returns were mixed on Nov. 3.

Though he carried burdens unrivaled by a president since Herbert Hoover — a plague that has killed 230,000 Americans in eight months and crashed the economy to depths not seen since the ’30s – Donald J. Trump amassed 72 million votes, the largest total in Republican Party history.

And while he lost the popular vote, Trump held off the predicted “blue wave.” He added seats in the House, a feat rivaling that of Richard Nixon, who added 22 GOP House seats while losing to JFK in 1960. And with Trump at the top of the GOP ticket, the Senate remained Republican.

Even Joe Biden’s 5 million vote margin was a tribute to Trump, who brought out friends and foes in astounding numbers, while Biden sheltered in place in his Wilmington basement reading cliches from his teleprompter.

Democrats, however, had great successes as well, reconstructing their “blue wall,” by winning all 18 states they had won in each of the presidential elections from 1992 through 2012.

Of what does the blue wall consist? All six New England states, save New Hampshire; New York, New Jersey and the mid-Atlantic states of Pennsylvania, Delaware and Maryland; the Middle America quadrant of Wisconsin, Michigan, Illinois and Minnesota; and the Pacific Coast states of California, Oregon and Washington.

Not only did Biden rebuild that blue wall, he also added New Hampshire and Virginia, thereby carrying every state that touches the Atlantic from Maine to North Carolina.

Democrats gained ground in the Republican heartland as well.

Where Nixon in 1972 and Reagan in 1984 swept all 11 states of the Old Confederacy — as did Woodrow Wilson and FDR in the days of Dixiecrat segregation — the GOP mega-states of Florida and Texas became visibly competitive. North Carolina and Georgia are becoming toss-ups. And Virginia, capital of the Confederacy, where they now tear down statues of Robert E. Lee, is closer to blue.

Democrats remain today the minorities’ party and Republicans the party of America’s white majority. White folks are roughly 60% of the U.S. population, though closer to 70% of the electorate. Both those figures, however, are slowly and steadily falling.

Republicans are going to have to grow their share of the white vote and their share of the Hispanic, Black and Asian vote or their future will begin to look like California today, where the Grand Old Party does not hold a single statewide office.

There are other presently insoluble problems for the GOP.

Democrats are the party of government and Republicans the party of the private sector. But the number of Americans who depend on federal programs — Social Security, Medicare, Medicaid, food stamps, student loans, housing subsidies, Earned Income Tax Credits, affirmative action — is growing, while the share of the population that contributes most to the programs is shrinking.

If people who receive a cornucopia of benefits pay no income taxes, then why would they vote against a party that promises them still more benefits, to be paid for by raising the income taxes of someone else?

As John C. Calhoun declaimed on the roots of democratic class warfare,

“The necessary result… of the unequal fiscal action of the government is, to divide the community into two great classes; one consisting of those who… pay the taxes, and… bear exclusively the burthen of supporting the government; and the other, of those who are the recipients of their proceeds, through disbursements, and who are… supported by the government; or, in fewer words, to divide it into tax-payers and tax-consumers.”

Who owns the future?

If Democrats can kill the filibuster and pack the Supreme Court, if they can add four new senators from Puerto Rico and D.C., and if they can pack the electorate by turning millions of migrants, legal and illegal, into U.S. citizens and regular voters, then you don’t need to be a weatherman to know which way the wind is blowing.

Yet, as seen in California, conservatism is not dead:

On Nov. 3, Californians came out to crush Proposition 16, an attempt by leftists to cut out of the state constitution a provision that forbids racial or gender discrimination in public employment, education and contracting. The margin of defeat for Prop 16 was 56% to 44%.

The left’s appeal to diversity, and affirmative action to achieve it, was rejected by a majority of voters who put first their belief in the idea of race neutrality.

Patrick J. Buchanan is the author of “Nixon’s White House Wars: The Battles That Made and Broke a President and Divided America Forever.”