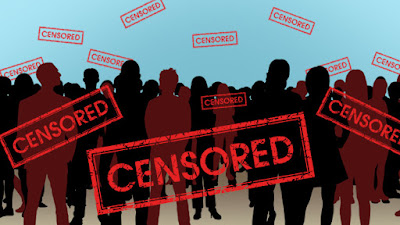 By Susan Duclos – All News PipeLine

As leftwing media, which pretty much covers the majority of mainstream media, continues to carry water for the social media giants, run by admitted liberals, with claims that the censorship of conservatives is just a “conspiracy theory,”  we note that the MSM’s influence is yet again in a downward spiral, because Americans have stopping buying the “fake news” the media has been selling.

An example comes from a recent Pew Research study, which asks about social media companies intentionally censoring political postings, and despite Democrats, online liberals and nearly all the leftwing media outlets denying the political censorship, vehemently, nearly 73% of Americans see social media platforms, like Twitter and Facebook, of censoring political speech on their platforms.

A majority of people who identify as Democrat or Republican believe social media platforms censor users, but the belief is more common among Republicans. A belief that social media companies practice censorship jumps to 9 in 10 for Republicans, while only 19% of Democrats believe this to be very likely and 40% believe it to be somewhat likely.

Republicans and Democrats also vary widely in their views on content moderation; 71% of Republicans said they disapprove of social media companies labeling content from elected officials as misleading or inaccurate, while 73% of Democrats believe the opposite. Overall, two-thirds of respondents said a majority of U.S. adults do not trust social media companies to label content as misleading.

Even ignoring the actual numbers and just looking at the Pew Research Study’s patterns of behavior, we note that Americans know what is going on….or at least a significant amount of them do.

This captures attention for a number of reasons.

• It provides further evidence that the liberal establishment media has lost control of the narrative, which we first noticed during the 2016 presidential election where the MSM, liberals, RINOs (Republican In Name Only) all tried to prevent Donald Trump from winning the GOP nomination, then upped their game to try to prevent him from winning the general election.

• It shows that the majority of Americans are not as stupid as the MSM thinks they are.

• It offers a clear statement to social media companies that Americans do not trust those running the companies. Yes Mr. Zuckerberg and Mr. Dorsey, that means they specifically do not trust either of you…..  and they shouldn’t.

• The contrast in the numbers according to party, where many more Democrats want the liberals that run Facebook, Twitter and other social media platforms to actively censor news, assuming Americans are too stupid to research and decide for themselves what to believe, compared to Republicans that think political posts should not be censored, clearly shows Democrats want whatever help against Conservatives those social media platforms can, and are, offering them in order to tilt the scales of the 2020 presidential election.

(ANP Emergency Fundraiser: Following Stefan’s medical emergencies during the month of July and upcoming medical bills for surgeries he’ll need, ANP is holding an emergency fundraiser. So if you like stories like this, please consider donating to ANP to help keep us in this ‘Info-war’ for America at a time of systematic censorship and corruption.) 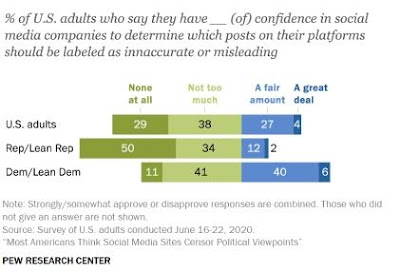 EVERYTHING WILL BE SCANNED FOR ‘HATE SPEECH’

Breitbart’s Technology Reporter, Allum Bokhari, was recently interviewed, and what he is reporting from his sources, should disturb anyone that is online.

“The things I’ve heard from my sources inside Silicon Valley is quite terrifying,” said Bokhari. “Increasingly, with these hate speech algorithms, everything you post on social media will be scanned by an AI algorithm, sometimes before you even post it, and that’ll determine whether it appears at the top of people’s feeds or gets buried.”

“A lot of conservative content is way more popular than left-wing content. It does very well unless there’s some artificial manipulation,” said Bokhari later in the interview.

“They were completely stunned by it. You can go and watch the video… Sergey Brin said the decision of the American voters ‘offended him,’ he compared Trump voters to ‘extremists’… He was talking about Trump voters in the same way that he might have talked about ISIS.”

“I’m sure many other people inside many other companies were dismayed at the election result, but these people control the most powerful company in the world.”

“What’s scary is, there’s no law and no regulation stopping these people from interfering in the election.”

“Yes, I actually do believe we are going to get to the bottom of this insidious, really, censorship of mostly conservative voices on social media,” he said. “And I think the Department of Justice has been looking at this issue, and I also believe that because of the way the algorithms that Facebook and Twitter and the like use to provide your news feed, I think that could be viewed, and maybe viewed by this Department of Justice, as a campaign contribution, an illegal campaign contribution, that ultimately, I think, they will step in and take action.”

“[I] think what is also happening among these companies, Facebook in particular — they have so much data on their individual users that they can essentially manipulate what you see, how you see it, and therefore, based on the feedback loop that is provided, they can then try to influence you to, whether it is to use a product, vote for a candidate,” Whitaker added. “It’s really, again, insidious. I think the Department of Justice has to act because our democracy can probably not stand this for another election cycle.”

Whitaker served as acting AG from November 7, 2018, to February 14, 2019, meaning he worked above many of the individuals still in the DOJ.  His phrasing of he “believes” this or that, is telling as to his ability to share what he knows without causing issues for his sources.

A recent example of what Whitaker is referring to came right before Joe Biden officially became the Democrat nominee for president, when Facebook suspended Biden critics, and Facebook and Twitter suspended accounts that posted critical or even entertaining memes about Biden.

In the months leading up to the Democratic National Convention, more than 260 conservative users on Facebook and Twitter had their posts about Biden scrubbed from the social media platforms. Posting an innocent meme showing light coming from Biden’s eyes meant an immediate suspension on Twitter for anywhere between 12 hours and two months. Facebook users who argued that Biden was “creepy” or posted actual pictures of the former vice president hugging, sniffing, or kissing children have had their posts removed as well.

The Media Research Center’s TechWatch division has been collecting and independently verifying incidents of online censorship since March 2020. Between April 1, 2020 and August 10, 2020, 260 users had posts or accounts censored due to their criticisms of Biden. Roughly half (129) of the incidents were reported and verified on Facebook. A nearly identical number (131 incidents) were reported and verified on Twitter.

“Of course that’s election interference,” said social media researcher and psychologist Dr. Robert Epstein. The former editor of Psychology Today also argued to the Media Research Center that this kind of censorship “could be considered a valuable, undeclared, in-kind contribution to a political campaign, which is unlawful.”

ANP readers can feel free to post all the memes they want in the comment section. (Battlesheep!) 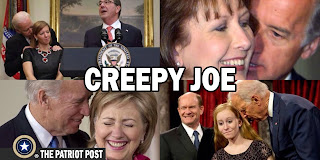 The media has lost much of its influence, which was crystal clear during the 2016 campaign cycle, resulting in the glorious defeat of the Hildabeast. As they have pumped more and more “fake news,” (Think Russian Collusion Hoax) throughout the past four years,  they have become almost irrelevant when folks now have more options than the “official narrative.”

The fact that Whitaker is making these comments right now about the DOJ,  indicates that much of the investigative phase is complete and we will likely start seeing the shoes drop shortly.

How much or little they can penalize social media giants is not something we can predict with any confidence. If we are talking fines alone, paying out a few million to rig an election is probably worth it to people like Zuckerberg and Dorsey.

Either way, the fight has to begin before it can see any success.

Share. Email friends and family. Force feed Biden videos to liberals online and off. Almost any one is good at this point because Biden can barely make it through a speech without screwing it up, even WITH a teleprompter.

Bypass the MSM by spreading the truth to everyone and anyone you can.

Here are a few very short ones to start with.