The definition of apathy is: Lack of interest or concern, especially regarding matters of general importance or appeal; indifference.

This is a huge problem with Vallejoans.  They do not like to think.  This is a problem in California and America.  How does one know if they are apathetic?  The voter who votes based on a yard sign, on a sign on the side of the road, on a billboard, on an endorsement from a local dignitary, or an endorsement from one of the Vallejo interest groups is apathetic.  They do not think for themselves, they are simply puppets. 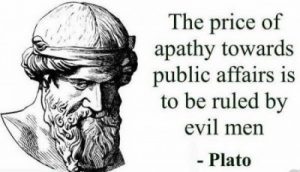 This is why Vallejo has so many people in leadership positions who are not fit to lead.  And, if we don’t change course, we will have more on November 6th.  The way the voting works is the various interest groups in Vallejo, all of whom are Democratic or left leaning, use their money and influence to pay candidates they like to spread their poisonous ideology in Vallejo.  These candidates prostitute themselves out to do the bidding of their wealthy donors.

These interest groups rarely show up to school board meetings or city council meetings, or if they do, they have a token representative attend for them.  They simply live their lives of pleasure and indolence, wining and dining themselves to their hearts content, attending sporting games, taking vacations, treating life like a gigantic party.  Then, when elections roll around, they get busy.  They interview the candidates, spend their money for signs, door knockers, and mailers.  They make sure they send mailers to every single voter who votes consistently.  It’s a numbers game, and these snakes are well organized.  Just like Boss Tweed of the corrupt Tammany Hall in New York of a century ago, these Vallejo Democrat bosses have a nice rig set up for themselves and their cronies.  They could give two hoots about Vallejo.   Vallejo is a mess because of them, but they don’t care.  As long as they have power and money, that’s all they care about!

If they cared so much about Vallejo, why don’t they show up at EVERY city council and school board meeting?  Because they don’t think they need to. They aren’t interested in ideas or changes that help Vallejo.  They honestly believe their money and connections are all they need to control Vallejo, and due to the naivete and gullibility of Vallejo voters, they have been right for decades.  It’s time for that to end, and I’m here to tell these special interest groups, that no matter what happens this election, you are in for a nightmare for the next four years.  Your games are over.  You will be called out continuously.  Vallejo will be informed about who you are and who your representatives are.  You will be turned into social pariahs, just as you have done to those who opposed you over these decades.  Your time is coming.

Watch them get up to speak.  They say the same silly nonsense nearly every time.  Rarely do they have a fresh idea.  They normally get up there, rattle off all their college degrees pretentiously, then name drop all the boards they are associated with, then go on to name drop famous Vallejoans, and end with a single sentence dealing with the topic at hand.  I once saw one community figure, who nearly took up two minutes rattling off their achievements, and nearly had no time to even say what he got up to say.  It was quite hilarious.

It was nauseating at the forums to hear the same exact spiels, nearly verbatim, from some of my colleagues?  Do they think?  They mindlessly repeat the same absurd leftist tropes, and the indoctrinated audiences hearts often well with ardent approval for the nonsense.  What hogwash!!

It wouldn’t be painful for me at all, if I got defeated and people who honestly have Vallejo’s interests at heart were elected.  But I get outraged when I see some of the candidates for school board are Johnny Come Lately’s, who never come to school board meetings or city council meetings, and think they are going to name their ‘credentials’, and have the acclaim of the mob!   Umm, running the schools requires more than simply having teaching experience!!!  You did the teaching experience because you were paid to do it.  What defines a person is what they do when they aren’t paid to do it.

Only when adults in Vallejo have wisdom and virtue will they be able to educate their children in it.  And the Founders of America, despite the nonsense the identity politics mob repeats about them, were well versed in wisdom and virtue.   We need to educate our kids in classical education.  Not one of the seven who oppose me have said one word about a classical education, and it’s doubtful if they appreciate it or understand it at all. Instead they are going on about ‘social justice’, and other media talking points.