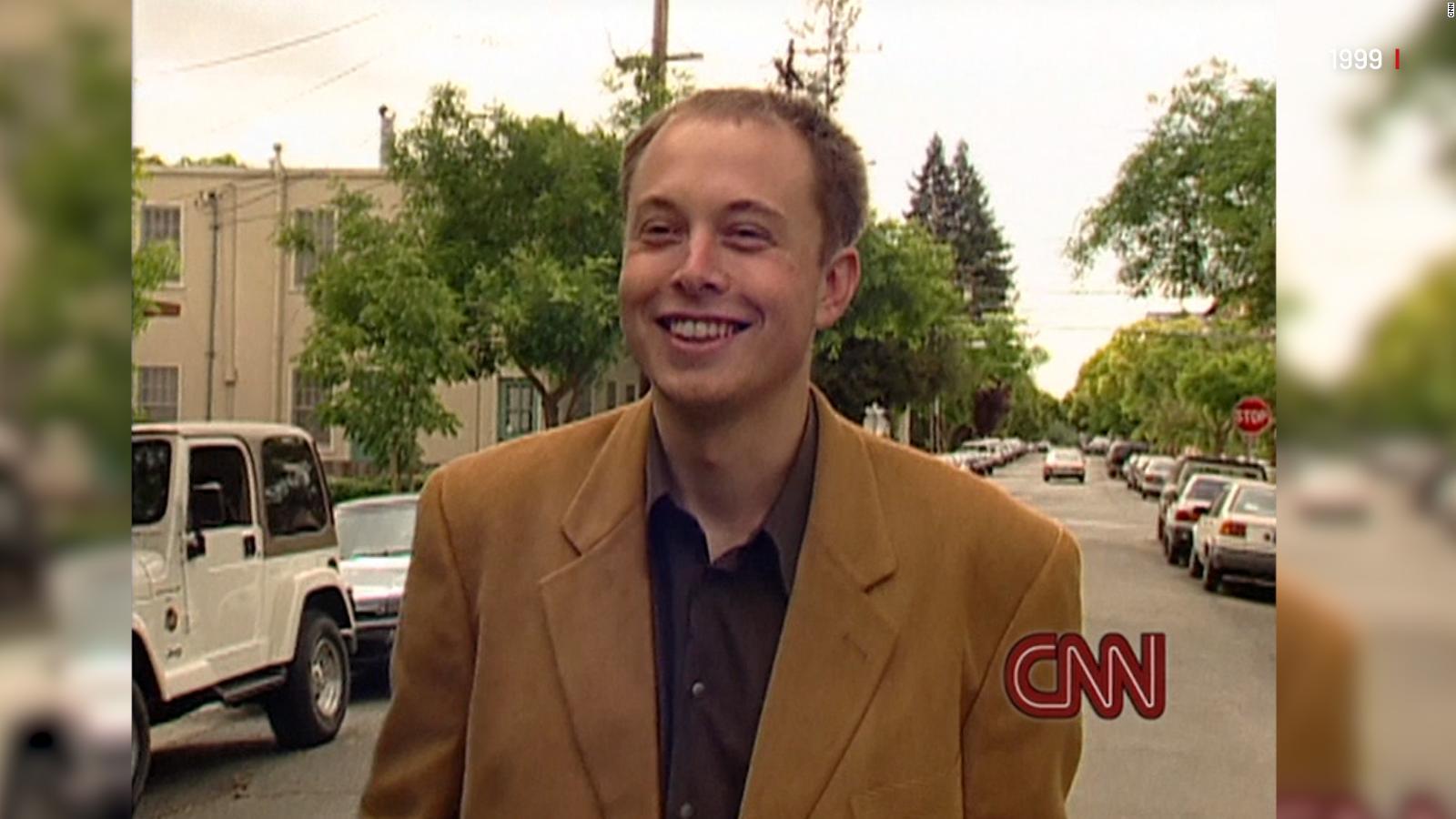 (The younger Elon Musk, pre. hair transplant)
Just when anti-globalists were getting nowhere, a new saviour has entered the ring.
I’d love to believe in Musk but his role is to breathe new life into Conservatives so that sane resistance to Communist Jewish NWO insanity does not collapse all together.  Divide and conquer.
Romanoff – “It’s not apparent, at least not to me, that he knows anything about anything, and I would say the same for Zuckerberg and the Google twins. These people are merely fronts for someone who really does have all the money.”

The Richest Man in the World
by Larry Romanoff(excerpt by henrymakow.com)Elon Musk appeared to come from literally nowhere and yet suddenly“owns” the world’s largest auto manufacturer. Musk at the same time began an aggressive program of launching tens of thousands of communications satellites, and then SpaceX, “Elon Musk’s private spaceflight company”, the maker of the Starship, planning International Space Station missions, no less. Then we have Musk buying Twitter for $44 billion.
In the last 100 years, anyone attempting to create a new auto company and brand has met with disaster, but Musk apparently experienced not a hiccup with the Tesla that is suddenly a world favorite. This would have required perhaps ten years of planning and design, the planning of factories and production, the creation of supply lines, the testing and certification, and so much more, but with Tesla this apparently all occurred overnight in a vacuum.

Are we to believe Elon Musk designed the Tesla? There is no evidence Musk has the ability to design even a dipstick, much less an entire car, so how did all this occur and what was the source of the background billions required to bring this project to fruition? Musk played no part in the creation of the Tesla. He just somehow showed up at the end, “owning” the company.
Similarly, the aggressive program of communication satellites that “Elon Musk” has launched; this as well would require many years of planning and design, to say nothing of arranging the launch facilities and obtaining the necessary thousands of paying customers. This again would require years and billions of dollars in financing but, like Bezos’ space flight program, this one suddenly appeared in full bloom, operating, launched, and ready to go. Who did the planning for this?

It certainly wasn’t Musk, so who was behind it? And the money for all this came from where? “Musk’s” Tesla has never made a profit, so where would he obtain the billions for a pie-in-the-sky system of tens of thousands of communications satellites? Nothing like this can happen without a decade or more of intensive planning and an enormous investment, and obviously none of that came from Musk.

Musk’s mother is Jewish. That makes Musk a Jew.

These would be enough challenge for any man, but then we had “Elon Musk” buying Twitter for $44 billion. How would that happen? We are told that Musk suddenly has wealth of – vaguely – $200 billion, with no detail, but presumably from stock holdings in “his” Tesla. But are we to assume that Musk has an extra $44 billion in loose cash sitting in the bank to purchase Twitter? That’s not possible, and Musk isn’t selling half his interest in Tesla shares to finance it, so what is the source of the money? The media confuse this by providing only a few sound bytes but no detail, and thus we have thoughts loosely in our minds that Musk is very wealthy and could somehow afford to purchase Twitter, but all we need to do is think to realise that is impossible.
The picture is clouded because the political ambitions of the Khazar Jews cannot be separated from their financial intentions. “Musk’s” satellite system is eventually to consist of 35,000 communication satellites – military, not civilian – some of which are already being used in Ukraine.

The Khazar Jews in the City of London are desperate for World War III, but they have no military of their own and must depend on the US (as the Bankers’ Private Army) maintaining military supremacy. If it hasn’t already occurred to you, the reason for this development was that the Chinese proved they can shoot down US surveillance and communication satellites, thus presenting an existential threat to US warmongering with China and Russia.

The solution is clever, and also obvious: you cannot shoot down 35,000 tiny communications satellites, thus maintaining US battlefield communication supremacy. The financing is interesting because normally the Jews push the US to make all these military investments, but the US no longer has the money for all these efforts and thus they had no choice but to finance this themselves – and channel it through Musk to disguise the origin.

There is no other source for the financing of such a massive project. It is obvious the financing didn’t come from “Elon Musk”, since “his” Tesla still cannot turn a profit, so where would he obtain the money for satellite development? The Jewish bankers in the City of London are the only source.
This is the same as “Mark Zuckerberg” a few years ago buying and forming companies to manufacture military drones and high-altitude balloons, the latter because dear Mark wanted everyone in the world to have Internet access. Not quite. The high-altitude balloons were not for Internet access but for military communications with the drones that “Facebook” was manufacturing, drones carrying warheads that could communicate by means of the balloons if China destroyed all the US military communications satellites.

So far as I could tell, nobody wondered why “Facebook” was manufacturing military drones and their communications systems. Again, not possible to push this cost onto the US military so the Jews in the City of London ran it through Facebook to disguise it as a civilian venture and hide the true source – and intention – from scrutiny.
Back to Tesla. lf you take the time to read Musk’s high-school level treatise on hyperloop transportation[69]
or listen to his media blurbs, it’s obvious the man hasn’t the intelligence to have attained his position independently. It’s not apparent, at least not to me, that he knows anything about anything, and I would say the same for Zuckerberg and the Google twins. These people are merely fronts for someone who really does have all the money.

And the plans. But we are supposed to believe that Elon “focus-on-my-cute-8-year-old-smile-and-my-adorable-3-year-old-sideways-looking-eyes-so-you-don’t-realise-how-stupid-I-am” Musk, is suddenly The Richest Man in The World from designing cars and satellites and space ships and heaven only knows what all. What rubbish.
That latter point deserves attention. Do you see Warren Buffett posing with a stupid smile and adorable sideways-looking eyes to seduce all the mothers into encouraging their daughters to buy his company shares? What kind of a man, apparently the CEO of trillion-dollar international companies, behaves in such a foolish fashion? A mental dwarf with serious emotional problems, no one else.

Similar arguments are true for Zuckerberg, Bezos, the Google Twins and others. None have the knowledge or ability, nor the enormous financing to do the things they are supposedly doing. Neither their fortunes nor their abilities can possibly be real. It is easier to accept a Bill Gates, starting with a small Microsoft and building over 40 years into a $50 billion prize, but to pretend that an Elon Musk who, out of the clear blue sky, goes from sleeping in his car and eating leaves from trees, suddenly is designing and producing electric autos and military communications satellites and space vehicles and so much more, is too ridiculous a prospect to bother refuting.

Some claim that Elon Musk is not a Jew. Elon, Alon a Hebrew masculine name that would not occur on a list of Gentile names. Musk attended Jewish schools in South Africa. His mother, Maye Haldeman, is Jewish but listed as “Canadian”, which is hardly an ethnic group. There are Jewish family and other relations (Elon’s brother married Jen Lewin), and more. Musk’s connections with Israel and powerful Jews have a long history, Tesla’s closet relationship with Israeli tech spanning many years and its self-driving technology is 100% Jewish, originating from the Israeli company Mobileye. Musk has close and high-level contacts in Israel, having met with Netanyahu (at his private residence) on more than one occasion.