The French identitarian writer and critic of Jewish power Hervé Ryssen was jailed on 18 September after having been found guilty of hate speech on three occasions. He has exhausted his right to appeal. He faces 17 months in jail and potentially more as he has other trials awaiting him.

In June 2018, Ryssen was sentenced to 1 year in jail, the maximum penalty, for a YouTube video entitled “The Jews, Incest, and Hysteria,” in which he explained why, in the judge’s words, “the Jews are an incestuous nation.” Evidently the judge was unmoved by the existence of numerous genetic clinics servicing Jews because of their propensity to various diseases as a historically in-bred population. Ryssen also had to give money to litigious ethnic lobbies, 2000 euros going to the National Bureau of Vigilance Against Anti-Semitism and 1000 euros for Lawyers Without Borders, France-Israel, and the International League Against Racism and Anti-Semitism (LICRA, France’s SPLC). 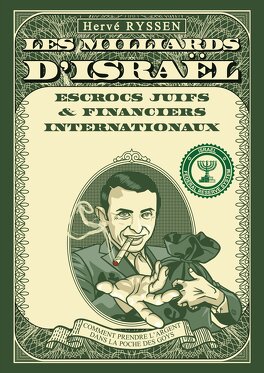 Israel’s Billions: Jewish Crooks and International Financiers: How to Pick Money from the Goyim’s Pockets

In January 2020, Ryssen was also found guilty of “contesting the existence of crimes against humanity.”

Ryssen is the author of numerous books on Jewry, with titles like The Jewish Mafia, Israel’s Billions, and The Planetary Hopes. The dissident website Contre-Infowrote:

In a country in which 100,000 jail sentences have not been implemented, even as prisons are being emptied because of COVID-19, they are taking the decision, a political one, to lock up a patriotic writer.

Hervé Ryssen has studied political Judaism in several books – but evidently certain subjects do not suffer “blasphemy.” He was basically sentenced because of tweets and book covers, his writings (which include very many quotes of Jewish intellectuals) being unimpeachable except for the odd sentence. He has never produced revisionist writings regarding the official history of the Second World War, but he simply shared a cartoon on Facebook. But the big media who deign to mention his incarceration present him especially as a holocaust denier [négationniste].

All this comes even as the French political-media class has again celebrated Charlie Hebdo’s right to “blaspheme,” at least where the Christian and Muslim religions are concerned. Je Suis Charlie for thee, but not for me.

I have had no personal contact with Hervé Ryssen. He is remarkable for being both a European identitarian and a critic of Jewish power (in general, French activists tend to focus on one or the other issue). Despite himself being a racial nationalist, Ryssen has managed to keep good relations with the anti-Zionist civic nationalist Alain Soral and the mixed-race comedian Dieudonné M’bala M’bala. 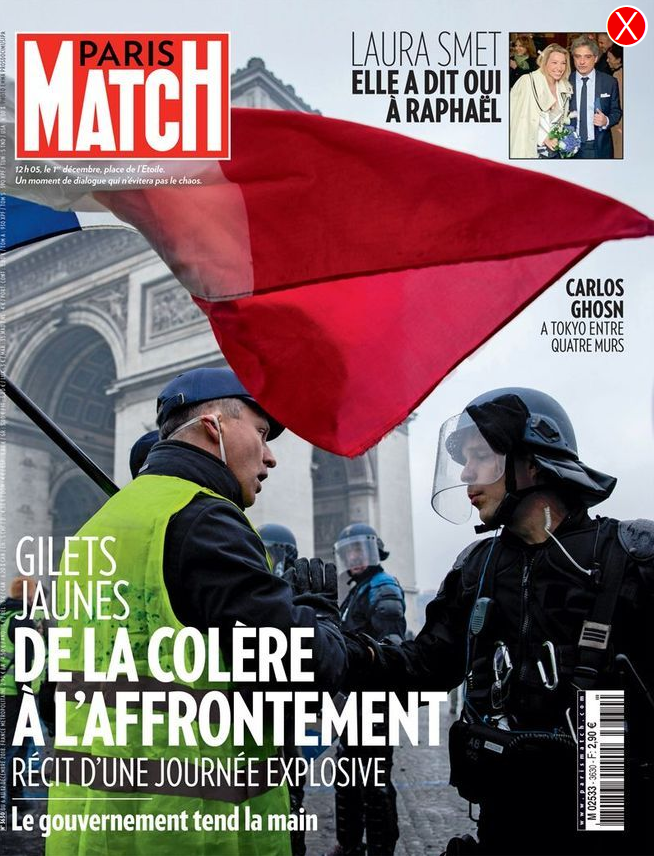 Hervé Ryssen immortalized on the cover of Paris-Match, quite accidentally used as a symbol of the yellow-vest movement.

Ryssen’s eloquence, erudition, and courage shine through in his videos. He greatly participated in the yellow-vest protests and witnessed their change in nature from a mass movement including ordinary Frenchmen and nationalists, to a leftover leftoid movement riven by anarchists and trade-union officialdom.

Ryssen is being incarcerated at Fleury-Mérogis just outside of Paris, the largest prison in Europe. 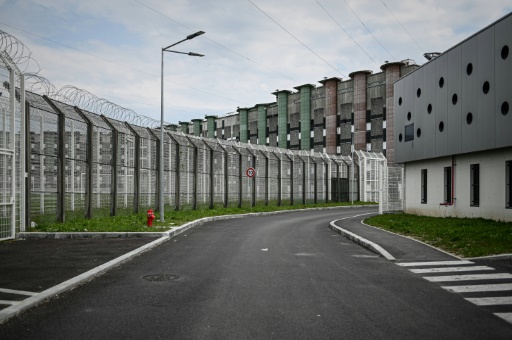 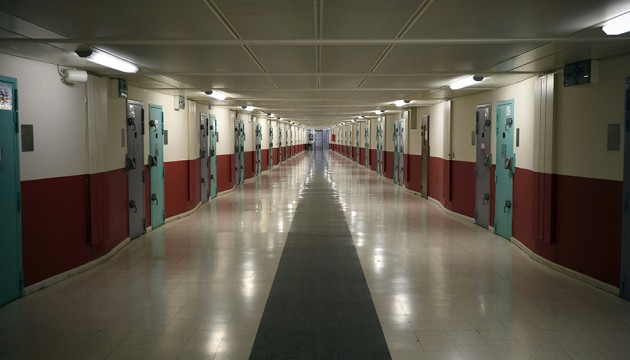 Ryssen cannot receive packages, but apparently is receiving numerous letters of support. A representative runs his Gab account and is providing updates on his situation.

Marine Le Pen has however distanced herself from Gollnisch, who is still an official in her Rassemblement National, retweeting her former partner Louis Aliot saying “Freedom of speech does not authorize every provocation or obscenity . . . Gollnisch’s statements only concern himself.”

I have the greatest contempt for Monsieur Ryssen and the feeling is mutual. But concerning criminal speech, nothing justifies him being in prison. But we are not in an American system in which anything can be said. We are in a European-style system where freedom of speech is framed by rules. For a time, I thought this system was possible but now I’m receding to the view that the best situation is that of the American system’s First Amendment.

The anti-Zionist civic nationalists at Égalité et Réconciliation were quick to denounce Goldnadel’s “duplicity” given that he has sued many people over the years for hate speech, including Roger Garaudy, Edgar Morin, Dieudonné, Robert Faurisson, Alain Soral, Jérôme Bourbon, Henry de Lesquen, Jean-Marie Le Pen, and . . . Hervé Ryssen. Indeed, Goldnadel is the founder of Lawyers Without Borders, which contributed to getting Ryssen sentenced to jail in 2018.

Finally, I must recall that in France explicit advocacy of French ethno-nationalism is illegal, but since February 2019 the French State considers that anti-Zionism (opposition to Jewish ethno-nationalism) is hate speech. 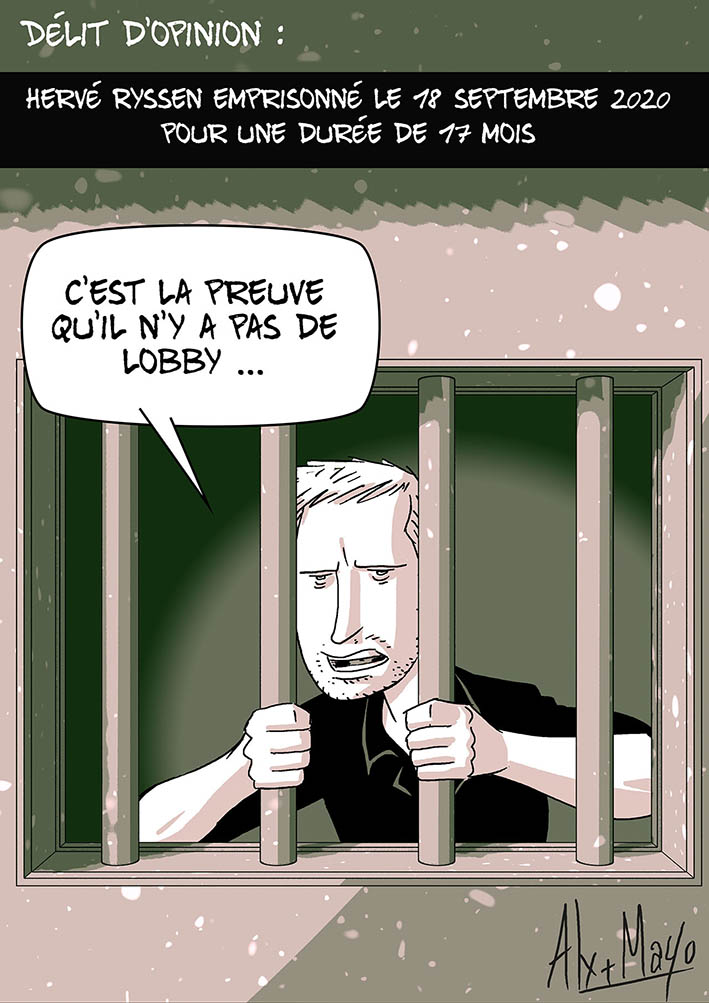 “It proves that the lobby doesn’t exist.”