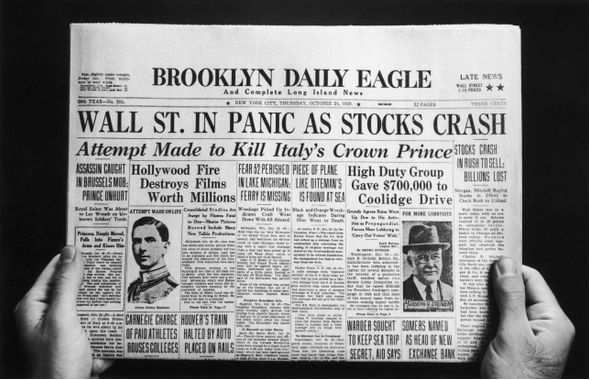 The Great Depression was an early example
of a contrived breakdown of societymuch like the covid hoax. See Covid inthe context of World Wars & Great Depressions,subterfuges designed to enslave and destroy.

Curiously, Churchill managed to be in the Gallery of the New York Stock Exchange on October 24, “Black Thursday,” with his friend Bernard Baruch, to personally watch the panic below on the exchange floor. Already in early September, when the market was near its highest peak, Baruch had sold his shares and advised Churchill to do the same. Baruch later advertised the fact that he had avoided the disaster, as proof of his investment acumen. It was more likely proof of his well-placed friends in London who had tipped him to the plans of (Bank of England Gov) Montagu Norman, who also financed Adolf Hitler.

Illuminati insider Chaim Rakovsky refers to the 1929 Crash and Great Depression as an “American revolution.” It was deliberately precipitated by the Illuminati for profit, to break the “classical American” character and to take political power.

GODS of MONEY — Ch. 5–Upending the World’s Chess Board
By F. William Engdahl
Summary by EGEG’s Comments are in Italics(henrymakow.com)

Prelude:
1861 – U.S.A. became bankrupt = Lincoln suspended the constitution. All fell under Maritime Admiralty Law
1871 – The ‘Corporation of Washington’ was setup
1878 – U.S.A. Corporation was setup in the district of Washington that made it it’s own State.
1929 – Roosevelt rewrote and reorganized a plan given that the USA was bankrupt and again constitution was suspended whereby he pledged US land and people for the debt.
1933 – The start of using Certificate of Birth (from Maritime Law, birth). It became the pledge of chattel against the fiat currency.
Corporation of the City of London Inc. and the Bank of England again in the nerve center of the world banking system.
1925 decision by Chancellor of Exchequer, Winston Churchill a crypto-jew.
London, they argued, would become the entrepôt for such American loans to Germany, Italy, Poland, Romania and the rest of Europe. Montagu Norman was able to persuade Benjamin Strong, (Fed Gov. 1914-1928) after Britain had come back on the Gold Standard, to lower U.S. interest rates. This allowed gold to go out of New York into London, and thus benefit the role of Sterling as a center of the re-established Gold Standard. 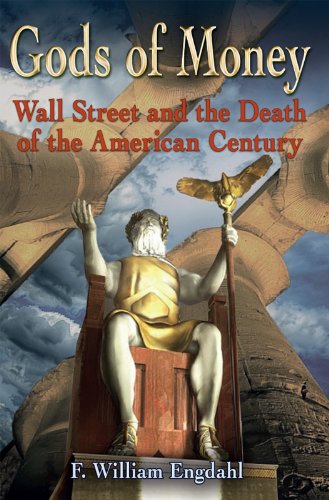 The spectacular collapse of the Wall Street stock market in October 1929, and the ensuing collapse of European financial markets, banks, industry and, ultimately, entire national economies, came as an unimaginable shock to most Americans and Europeans. They had been in no way prepared for what happened.

How could they be, none were on the inside, and propaganda as in Public Relations by Bernays was well underway.

By early 1929, call loans had risen almost double to an impressive $6 billion. Low interest rates, fed by Benjamin Strong’s policy of supporting the Pound, were adding fire to a stock market boom unlike any seen before.

By 1928, the United States possessed more than 40% of total world monetary gold stocks, some $ 4,141,000,000 at the day’s gold standard value. By contrast, France, the second largest holder of gold, held only $1.2 billion, while Britain held a mere $754 million, and Germany, $666 million. From 1921 through the end of 1928, the ample supplies of gold served to ignite the most spectacular financial bubble in American history.

Here is the financial setup for the crash to come, all manipulated by the UK Banksters-illuminati Rothschild Cabal.

However, here was also the Achilles heel of the post-Versailles international financial structure. A significant share of the dollars that had been created in the U.S. banking system in the 1920’s began to go to Europe, seeking far higher returns than possible in America. And no country was more the focus of American financial interest than Germany, with its enormous industrial potentials.

In April 1924 they issued a proposal to place Germany under control of a central reparations authority for the coming 50 years.

From 1924, when the Dawes Plan was finalized, until the beginnings of the international financial crisis in 1930, fully 62% of all long-term foreign borrowing by German banks, industry and municipalities, an impressive amount of well over 6 billion Reichsmarks ($1,440 million, an enormous sum for its day), came from U.S. banks and financial institutions.

The amounts of money lent to Germany  by US is staggering once considered what was to follow.

Pg 10 — By the end of the 1920’s, partly because of the availability of this flood of American capital, Germany’s economy appeared to the world as vibrant, healthy and growing. But behind the facade, its banks and industry were fragile.

Pg 11 –While the newly-created Federal Reserve Bank diligently watched for any hint of inflation in commodity prices during the 1920’s, they had ignited a far more dangerous inflation, that of financial paper. Most domestic bank loans in the 1920’s went directly to finance securities purchases, mostly stocks.
The Federal Reserve (branch of UK Banksters-illuminati) watched from the side lines as the plan played out just as they set up.

The private American banking system, backed by the large U.S. gold reserves, had extended credit for purchase of stocks on an unprecedented scale. A vast financial pyramid was under construction. In 1925 alone, as bank loans to stock brokers to finance stock purchases more than doubled, to a record $2.8 billion, the New York Stock Exchange index inflated by 40%. Exactly as has been going on the last number of years; get ready.
Pg 12 — But in the growing frenzy by citizens of all walks of life, to share in the new riches of being a stock owner, few took heed of such unthinkable prospects. Sort of like the frenzy going on now with it’s built in arrogance ‘I am right and the gov’t would never kill us off’.
The total volume of common stock financing by companies increased by 661% between 1926 and 1929, a rise from $579 million to $4,406 million. Not since the 1620’s Holland tulip bulb speculation, had the world seen such a speculative delusion. Pure simple greed based upon stupidity of the masses following like sheep.

Pg 14 — The remedies prescribed always involve the installing in the central bank of a foreign supervisor, who is British or designated by the Bank of England, which serves both to support the Pound and to strengthen British influence. To guarantee against possible failure, they are careful to secure co-operation of the Federal Reserve Bank of New York.

Thus we see the Federal Reserve via Committee at Geneva set out the spiders web of full economic control of all countries. All headed by UK Banksters. 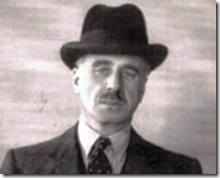 Pg 15 — Clarence Hatry (Jewish stock promoter, left)had been blackballed, and as his large business empire collapsed, it triggered the collapse of the London Stock Exchange. On September 20, 1929 the London Stock Exchange Committee suspended share dealings, after three days of panic selling with no buyers. After all, as Norman well knew, the difference between fraud and speculative acumen in finance was often a matter of timing and connections. Montagu Norman was well aware of what he was doing in blackballing Hatry. For want of extending a mere four million Pounds to a British company, Norman allowed the entire post-Versailles international monetary and economic system to collapse. With this move by the Bank of England, a full-scale international crisis was detonated.

Thus Sept 20 1929 out of City of London Incorporated we see the first domino fall.

Pg 18 — By early October, share prices on the New York Stock Exchange had fallen 15% from the pre-Hatry crisis levels of early September. The selling in New York came primarily from investors in the City of London. The value of stocks on the New York exchange had already fallen by 30%, a paper loss of a staggering $26 billion, since the September 1929 peak. It was the beginning of the unwinding of the entire credit structure of postwar America.

The plan set out by UK Banksters was well underway for total collapse.

Pg 20 — Curiously, Churchill managed to be in the Gallery of the New York Stock Exchange on October 24, “Black Thursday,” with his friend Baruch, to personally watch the panic below on the exchange floor. Already in early September, when the market was near its highest peak, Baruch had sold his shares and advised Churchill to do the same. Baruch later advertised the fact that he had avoided the disaster, as proof of his investment acumen. It was more likely proof of his well-placed friends in London who had tipped him to the plans of Montagu Norman.

It is only UK Bankster insiders that get away with fraud; that they orchestrated and ran on a global scale. Just as it is today.
—————-
Related-Illuminati insider Chaim Rakovsky refers to the 1929 Crash and Great Depression as an “American revolution.” It was deliberately precipitated by the Illuminati for profit, to break the “classical American” character and to take political power.

“The man through whom they made use of such power was Franklin Roosevelt. Have you understood? …In that year 1929, the first year of the American Revolution, in February, Trotsky leaves Russia; the crash takes place in October…The financing of Hitler is agreed in July, 1929. You think that all this was by chance? The four years of the rule of Hoover were used for the preparation for the seizure of power in the United States and the USSR: there by means of a financial revolution, and here [Russia] with the help of war [Hitler, World War Two] and the defeat which was to follow. Could some novel with great imagination be more obvious to you?” (273)