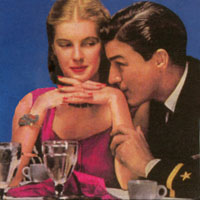 One of my biggest life regrets
is having unrealistic expectationsof women.The idealization of sex, women andromantic love in our societyis characteristic of Satanism. Why? Satanism actively promotes false Gods, i.e. idolatry.

Cabalist Jews believe that perception is reality. They are reality inventors. Thus, they have taken control of the mass media and movies to shape perception.

Their “reality” (e.g. denial of gender) does not correspond to God or nature.  God is Truth. Truth is ultimate reality.  They have inducted us into their cult, cabalist Judaism, which seeks to supplant God. (Satanic cults, Freemasonry etc., control & exploit their members by corrupting & making them sick.)

I will turn 72 soon. When I look back at the young women that enthralled me– I realize now they were delusions. These ladies were not whom I thought they were. I idealized them.

They use sex like catnip, to control us and make millions of dollars.

We were programmed by movies and music to fulfill mental concepts whether or not they correspond to reality.

We were programmed to worship movie stars — “sex Goddesses.”
Since young women are gatekeepers of the “Holely Grail,” they’re elevated to the status of goddesses.

We fetishize them. They can do no wrong. Men are conditioned to seek their approval.
IT’S ALL IN THE MIND

At age 12, in 1961 I saw the movie Spartacus, directed by Stanley Kubrick. In one scene, the camera focuses on Kirk Douglas’ face as Jean Simmons sheds her gown. His face is full of wonderment and awe, lighted by the mystical glow seeming to emanate from her naked body but actually from the fire. The scene made a profound impression on me, a boy just entering puberty.

Brainwashed! The human being lives in a world of thought. Sexual arousal is largely in the mind. Thought is easily influenced or controlled. Convince us we are chickens and we will cluck. Convince us that the female body is desirable or that sex is the best thing life has to offer, and we will chase that. It’s all in the mind.

I chased women with the best of them. But now that testosterone has relaxed its grip, I am left scratching my head and wondering why? Women are just people, as boring as men or more so. Their bodies are ridiculous, or soon become so.
DELIBERATE IMBALANCE
Paradoxically, female entitlement and male emasculation prevents successful pairing. This is not a coincidence. As long as men idealize women, they remain children. This is how the Illuminati promotes arrested development. They are taking male power by giving it to women who become their agents of subversion.
Clearly one of the Illuminati’s problems with Islam is that it does not put on a pedestal. Quite the opposite. Islam, like Christianity are real religions.

Men would be far more successful if they thought of women as instruments. As First Mates to their Captains. I believe most women in their heart-of-hearts prefer this.
Thus, a man must define his goals and the role he wants a woman to play. Companion? Mother?
Men, when you put a profile on a dating site, don’t talk too much about yourself. Instead, describe what you are looking for.
Women want men to give them an honorable purpose. They don’t want to be his purpose.

HOOK UP CULTURE
The current hook-up culture is bad for women. Their sex appeal is a function of their fertility which declines rapidly after 40. That’s why women need to establish a loving marriage and family to provide love and security into old age.
Women used to earn love by loving husband and children.  They were loved for what they did: love husband and children. A girlfriend once said to me, “I want to be used,” and she didn’t mean for sex.

Feminism has convinced many women they don’t need to give love, especially to men. Eventually that leaves them high and dry, alone and bitter.
Sex is really about procreation. We are meant to marry, propagate and move on to other things. The Illuminati have arrested our development by sabotaging marriage. Sex has become a life-long obsession that has frozen society in an adolescent mould and poisoned all human relationships.

You cannot look at a beautiful child without being taken for a pedophile.

I advocate marriage and family. Part of my detachment is due to being happily married. My wife empowers me in many ways.

But many young women today have been re-engineered to fear, imitate and challenge men. They have been lied to and betrayed by society.

A young male friend complained that ” the girls he comes across are predatory – they expect sex on the first meeting, and are only out for one-night-stands, and how he and his friends feel confused, as though their gender role has been usurped.”

The mating instinct in young men is just as powerful as in women.That’s why they need to seek only women who want marriage. Study their character through patient courtship. Avoid feminists, sluts and women who had bad relationships with their fathers. Look for a dependable helpmate/ companion rather than soul mate. (Souls are too mercurial.)

Love and sex shouldn’t be your first priority. These add to life but our primary relationship is with God, who is the personal ideal we set for ourselves.

Henry David Thoreau said: “Every man is tasked to make his life, even in its details, worthy of the contemplation of his most elevated and critical hour.”

God is represented by our soul. Our goal is to be in total possession of ourselves (true to our ideal self) always.
Ralph Waldo Emerson said, “A trust in yourself is the height of piety, not pride. It is unwillingness to learn from any but God Himself.”