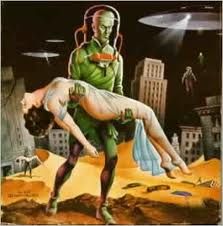 SATANISTS ARE ENEMIES OF LOVE

Western men (and women) should be very angry at Illuminati Jewish bankers and their Masonic lackeys. Like alien invaders, they abducted our women, brainwashing them to become lesbian and frigid. This vicious satanic attack on society by our traitorous “leaders” has been marketed as “women’s rights.” Feminism is elite social engineering, designed to destabilize and depopulate society, masquerading as grassroots social change.

Men want power. Women want love.Heterosexual marriage is based on the exchange of female (worldy) power for male power expressed as love.  Instead of surrendering power, feminism taught women to seek power instead of love.
The Power of Sexual Surrender, a 1958 book by female psychiatrist Marie Robinson MD, states that femininity is based on female sacrifice (altruism) and trust in a man. This is the wellspring of love, repaid by husband and children. Feminism, which is Communist in origin, destroyed this trust and outfitted women with a psychological penis. Power = penis. Both sexes have been neutered. Where women once empowered men, now they emasculate them. Instead of devoted wives and mothers, many women have become sexually frustrated, angry, frigid man-haters. This indoctrination continues in the mass media today.

QUOTE: Once the feminist “log jam” is removed, a woman’s natural instincts will flow and health will be restored. Essentially this involves “allowing herself to trust her husband in a very deep sense. It means that she finally realizes that she no longer has to fear or oppose his strength, but that she can rely on it to protect her, to give her the secure climate necessary for the full flowering of her femininity.”

Marie N. Robinson MD, a Cornell educated psychiatrist devoted her New York City practice to the treatment of frigidity. Her book, The Power of Sexual Surrender(1958) is a revealing study of the feminine psyche. It is out-of-print. Why? It is politically incorrect.
Marie Robinson has disappeared down the memory hole. There is no information about her on the Internet, no Wikipedia entry. Why? Welcome to the NWO.
Dr. Robinson says that millions of American women suffer from frigidity. Frigid women universally adopt the feminist view that a career as a wife and mother is demeaning and men exploit woman. This creates an “emotional logjam” which obstructs sexual response and psychological development.
Dr. Robinson writes that a woman’s identity lies in an “essential feminine altruism.”
Her self-expression and power are based on making her husband and children her first priority. Similarly, her sexual satisfaction and spiritual fecundity depend on self-surrender.
GENDER DIFFERENCES

Robinson says men and women are different by nature. Men are designed for mastery of the external (physical) world, and women for mastery of the internal (spiritual) world and the home. These are not social stereotypes, as feminists argue.
“Women are designed for duties different from those of the marketplace, another kind of stress entirely,” writes Robinson. They “tend to lose their essential womanliness if they stay [in the marketplace] by choice.” (149)
According to Robinson, modern women think they are no longer needed as women. Before the industrial revolution, the home was the centre of all life and a woman was its heart. She nursed and trained the children, prepared clothing and food, and helped with farm tasks.
The industrial revolution seemed to make women obsolete. Children were not needed and were even considered a liability. Everything could be bought in stores. The home was empty. Children went to school, husbands to work.
Woman’s response was to turn against her own femininity. Mary Wollstonecraft wrote a feminist manifesto Vindication of the Rights of Women (1792) that proclaimed women were identical to men, and promoted maleness in women.
(Alien, D Rockefeller Jr.) According to Robinson, “the feminist credo thoroughly discredited feminine needs and characteristics and substituted male goals for female goals.”(53)
The other response to the industrial revolution was not feminist, but “Victorian.” Robinson says Victorian women took “revenge” on men by denying women had any sexual feelings. They “were amazingly successful in convincing men and even scientists that frigidity was indeed a basic attribute of the female.” (54)
These factors laid the foundations for modern female neurosis.
“The depreciation of the goals of femininity, biological and psychological, became part and parcel of the education of millions of American girls. Homemaking, childbearing and rearing, cooking, the virtues of patience, lovingness, giving ness in marriage, have been systematically devalued. The life of male achievement has been substituted for the life of female achievement.” (55)

FEMININE DEVALUATION AND SELF-HATRED
The feminist-Victorian antagonism to men was handed down from mother to daughter so that “to millions of women, hostility towards the opposite sex seems almost a natural law. Although many a modern women may pay lip service to the ideal of a passionate and productive marriage to a man, underneath she deeply resents her role, conceives of the male as fundamentally hostile to her, as an exploiter of her. She wishes in her deepest heart, and often without the slightest awareness of the fact, to supplant him, to exchange roles with him.” (emphasis mine 56)
(l. alien, Jacob Rothschild)
Robinson says that if feminism had brought women happiness, the game might have been worth it.
“But it hasn’t been. The game has brought frigidity and restlessness and a soaring divorce rate, neurosis, homosexuality, juvenile delinquency all that results when a woman in any society deserts her true function.” (56)
Dr. Robinson writes that once the emotional “log jam” is removed, a woman’s natural instincts will flow and health will be restored. Essentially this involves “allowing herself to trust her husband in a very deep sense. It means that she finally realizes that she no longer has to fear or oppose his strength, but that she can rely on it to protect her, to give her the secure climate necessary for the full flowering of her femininity.” (153)
For a profound vaginal orgasm, Robinson writes, “the excitement comes from the act of surrender. There is a tremendous surging physical ecstasy in the yielding itself, in the feeling of being the passive instrument of another person…” (158)
On the other hand, the woman who mistrusts her husband’s love and, as a consequence, her own femininity has a “difficult, painful, frenetic” approach to life. She is at war with herself. In bed, she has to feel “in control all the time.”
Robinson regards the clitoris as a masculine vestige. She implies that a woman may still be frigid even if she is sexually active and mechanically adroit. Feminine sexuality depends on “absolute trust” in a man, which allows a woman to fully receive and fully respond.
Dr. Robinson says there is nothing in life more important than love. She believes marriage is the key to human development. The power of love is felt in the world through this relationship.
(l. alien Z Brzezinski)
“Love means, in its very deepest sense union; union between individuals…It is the most basic and profound urge we have and its power for good is illimitable… the lover partner becomes as important as oneself…This fact is why real love never leads to domination or to a struggle for power…” (129)
No one is questioning the right of a woman to have a career. The issue is the social engineering that changes female nature and priorities.
FEMINISM AS ELITE SOCIAL ENGINEERING & DEPOPULATION

The significance of The Power of Sexual Surrender cannot be overstated.
By coercing women to abandon their femininity and usurp the male role, feminism throws a spanner in the natural heterosexual mechanism of humanity. This is reflected in the decline of marriage and the birth rate, and the rise of divorce.
Millions of women are condemned to loneliness and frustration. Similarly, men are deprived of the role of protector and provider essential to their development and fulfillment.
(Alien tool, Betty Friedan)
The triumph of such a wrongheaded ideology, and the suppression of the truth, signifies that control in the world has passed to a malignant force.
A satanic cult, the Illuminati,(Cabalist Jews and Freemasons) fosters feminism as part of a long-term agenda to dislodge Western civilization from its religious and cultural moorings, and create a world police state in its place.
—
Cited in the Introductory Note – American Communism and the Rise of Feminism
How the Rockefellers ReEngineered Women
The Effect of Sexual Deprivation on Women