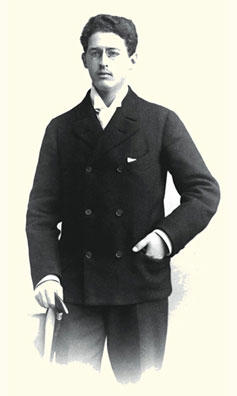 “We who have posed as the saviors of the world; we who have even boasted of having given it “the” Savior;
we are today nothing else but the world’s seducers, its destroyers, its incendiaries, its executioners…I look at this world, and I shudder at its ghastliness; I shudder all the more as I know the spiritual authors of all this ghastliness. . .” Oscar Levy, 1920
Oscar Levy (1867-1946) left, was a British Jewish physician, Nietzsche scholar, and son of a banker.

This article is from his Preface to George Pitt-Rivers’s The World Significance of the Russian Revolution,
where Levy acknowledged the Jewish role in Communist subversion. For his trouble, Levy was driven out of England.

Makow Comment:  Cabalist Judaism is a satanic cult that seeks to subjugate humanity by
destabilizing the world. Covid is but the latest example. The Gentile attempt at civilization must fail in order to make way for Satanist hegemony. The Cabalist (Illuminati) bankers enlisted Freemasonry as their instrument of subversion.
Cabalism maintains that God is “formless, unknowable and not in the universe.” This is Satanism. How can we obey God if He is unknowable? Cabalists pretend to channel God’s will. They usurp God’s place and want everyone to obey them. Hence the scamdemic.

This cancer has been festering beneath the surface for centuries. Now the scamdemic has exposed it for all who have eyes to see.

Every writer, who, like yourself, isoppressed by the subject of the present and embarrassed by his anxiety for the future, MUST try to elucidate the Jewish Question and its bearing upon our Age.

For the question of the Jews and their influence on the world – past and present – cuts to the root of all things, and should be discussed by every honest thinker, however bristling with difficulties it is…
JEWISH “IDEALISM”  MISGUIDED AND EXPLOITED

No, you are not vulgar; you are a very enlightened critic of our Race.

For there is an anti-Semitism… which does the Jews more justice than any blind philo-Semitism, than does that merely sentimental “Let-them-all-come Liberalism” which in itself is nothing but the Semitic Ideology over again.  And thus you can be just to the Jews without being ‘romantic about them.

You have noticed with alarm that the Jewish elements provide the driving forces for both Communism and capitalism, for the material as well as the spiritual ruin of this world.

But then you have at the same time, the profound suspicion that the reason of all this extraordinary behavior may be the intense Idealism of the Jew. In this, you are perfectly right. …

Who stirred up the people during the late war in Germany? Who pretended to have again the truth, that truth about which Pontius Pilate once shrugged his shoulders? Who pleaded for honesty and cleanliness in Politics, that honesty which brings a smile to the lips of any experienced Pro-counsel of to-day?

Writers who were mostly Jews: Fried, Fernau, Latzko, Richard Grelling — the author of J’accuse’, who was killed and allowed himself to be killed for these very ideas and principles. Men and women of the Jewish Race: Haase, Levine, Luxemburg, Landauer, Kurt Eisner, the Prime Minister of Bavaria.

From Moses to Marx, from Isaiah to Eisner, in practice and in theory, in idealism and in materialism, in philosophy and in politics, they are today what they have always been: passionately devoted to their aims and to their purposes, and ready, nay, eager, to shed their last drop of blood for the realization of their visions.

“But these visions are all wrong”, will you reply.
“Look where they have led the world to. Think, that they have now had a fair trial of 3,000 years’ standing. How much longer are you going to recommend them to us and to inflict them upon us? And how do you propose to get us out of the morass into which you have led the world so disastrously astray?”

To this question, I have only one answer to give, and it is this: “You are right”.

This reproach of yours, which — I feel it for certain — is at the bottom of your anti-Semitism, is only too well justified, and upon this common ground I am quite willing to shake hands with you and defend you against any accusation of promoting Race Hatred: If you are anti-Semite, I, the Semite am an anti-Semite too, and a much more fervent one than even you are. . .

We (Jews) have erred, my friend; we have most grievously erred. And if there was truth in our error 3,000, 2,000, nay, 100 years ago, there is now nothing but falseness and madness… a madness that will produce an even greater misery and even wider anarchy.

I confess it to you, openly and sincerely, and with a sorrow whose depth and pain an ancient Psalmist, and only he could moan into this burning universe of ours. . .

We who have posed as the saviors of the world; we who have even boasted of having given it “the” Saviour; we are today nothing else but the world’s seducers, its destroyers, its incendiaries, its executioners.

We who have promised to lead you to a new Heaven, we have finally succeeded in leading you into a new Hell. . .

There has been no progress, least of all moral progress. . . And it is just our Morality, which has prohibited all real progress, and — what is worse — which even stands in the way of every future and natural reconstruction in this ruined world of ours. . .