Going back many years now, ANP has reported many times upon a mysterious website that has kept meticulous track of military equipment numbers across the planet, using groups such as the CIA, US State Department, US Department of Defense and others as their ‘sources’, and their absolutely bizarre forecasts of a greatly ‘depopulated’ Western world by the year 2025.

With one of their most recent ‘forecasts’ foretelling a fall of America’s population from 330 million to less than 100 million by the year 2025, a ‘forecast’ which they’ve been regularly adjusting downwards for the past 5 years+, we were caught by surprise upon opening an email from ANP reader ‘Jack’ this morning informing us that Deagel has completely removed all of their ‘forecasts’ for 2025, going with a strictly ‘military’ feel.

With Deagel also removing their very lengthy explanation of why they felt major doom was ahead for America and the Western world, with that explanation previously blaming cascading financial troubles due to Covid-19 and the very real possibility of nuclear war in our futures, we’re also going to take a look within this story back at their reasons why they felt the world was heading into major trouble while things are heating up both abroad and here at home.

And while we’ve long been warning of Deagel’s forecast on ANP, with such stories called ‘tinfoil hat conspiracy theories’by those who don’t want to see the truth, a recent story on Doug Casey’s International Man titled “Doug Casey on the Shocking 2025 Deagel Forecast…War, Population Reduction and the Collapse of the West” warned of what could be “the biggest thing in world history.”

Doug Casey: I’ve got to say that I wasn’t familiar with Deagel—it keeps a low profile. Deagel is in the same business as Jane’s—which has been in the business of analyzing weapons systems for many decades.

A look at the Deagel website, which is quite sophisticated, makes it clear we’re not dealing with some blogger concocting outrageous clickbait. It seems to be well-connected with defense contractors and government agencies like the CIA.

They’ve predicted that about 70% of the US population, and about the same percentage in Europe, is going to disappear by 2025. It’s hard to believe that anybody in their position would make a forecast like that. There’s no logical business reason for it, especially since it was done before the COVID hysteria gripped the world. It stretches a reader’s credulity.

Could it possibly happen? It would be the biggest thing in world history.

Yet with those numbers ‘depopulated’ actually MUCH fewer than the Georgia Guidestones is calling for, with that‘mysterious monument’ erected by unknown ‘elitists‘ calling for a world population to ‘remain steady at 500 million’, which means a 7 BILLION ‘culling’ from what it currently is.

(ANP NEEDS YOUR HELP: Donations and ad revenue are all that keep ANP online, so please consider donating to ANP to help keep us in this fight for America’s future at this critical time in US history. With ‘slow-Joe’ Biden occupying the White House, and at a time of systematic, ‘big tech’censorship and widespread Democrat corruption, truthful media and alternative views are crucial.)

We documented that explanation in this October 17th story on ANP titled “Deagel Warns A Dangerous New Trend Is Taking Place That Will Overshadow The Coming Election, Covid-19 And The Democrat-Inspired Social Chaos Across America – ‘The most likely major event of the 2020’s could leave billions of casualties’ “:

In 2014 we published a disclaimer about the forecast. In six years the scenario has changed dramatically. This new disclaimer is meant to single out the situation from 2020 onwards. Taking about the United States and the European Union as separated entities no longer makes sense. Both are the Western block, keep printing money and will share the same fate.

After COVID we can draw two major conclusions:

1) The Western world success model has been built over societies with no resilience that can barely withstand any hardship, even a low intensity one. It was assumed but we got the full confirmation beyond any doubt.

2) The COVID crisis will be used to extend the life of this dying economic system through the so called Great Reset.

The Great Reset; like the climate change, extinction rebellion, planetary crisis, green revolution, shale oil (…) hoaxes promoted by the system; is another attempt to slow down dramatically the consumption of natural resources and therefore extend the lifetime of the current system. It can be effective for awhile but finally won’t address the bottom-line problem and will only delay the inevitable. The core ruling elites hope to stay in power which is in effect the only thing that really worries them.

The collapse of the Western financial system – and ultimately the Western civilization – has been the major driver in the forecast along with a confluence of crisis with a devastating outcome. As COVID has proven Western societies embracing multiculturalism and extreme liberalism are unable to deal with any real hardship. The Spanish flu one century ago represented the death of 40-50 million people. Today the world’s population is four times greater with air travel in full swing which is by definition a super spreader. The death casualties in today’s World would represent 160 to 200 million in relative terms but more likely 300-400 million taking into consideration the air travel factor that did not exist one century ago. So far, COVID death toll is roughly 1 million people. It is quite likely that the economic crisis due to the lockdowns will cause more deaths than the virus worldwide.

With that explanation then going into the very real possibility of a full-scale nuclear war in our near futures, warning that Russia has been preparing for such a conflict since the year 2008 while China had been doing the same for over 20 years, Deagel, which has regularly kept track of military equipment and purchases, then warned a major war was near.

Six years ago the likelihood of a major war was tiny. Since then it has grown steadily and dramatically and today is by far the most likely major event in the 2020s. The ultimate conflict can come from two ways. A conventional conflict involving at least two major powers that escalates into an open nuclear war. A second scenario is possible in the 2025-2030 timeframe.

If there is not a dramatic change of course the world is going to witness the first nuclear war. The Western block collapse may come before, during or after the war. It does not matter. A nuclear war is a game with billions of casualties and the collapse plays in the hundreds of millions. 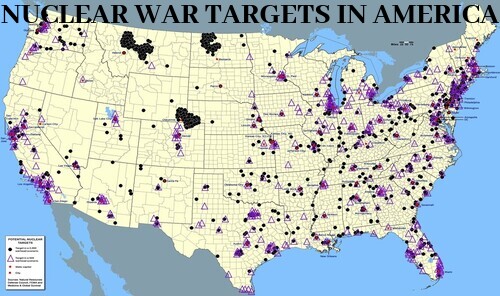 With Deagel making that nuclear war prediction back in October of 2020, we see in today’s headlines that warning now coming to possible fruition. As the Daily Mail had reported in this April 20th story titled “US must prepare for nuclear war: Strategic Command warns today’s unpredictable conflicts could escalate ‘rapidly’ where countries consider nuclear use as ‘their least bad option'”, should we continue down the mad path we’re on, nuclear war is a very real possibility.

Warning within that story that any such war might strike before most Americans even knew what hit them, Tucker Carlson also recently warned on his show that Joe Biden and Democrats insanely appear to be rapidly moving towards war with a country that could completely annihilate us, leaving potentially hundreds of millions dead should a long-term grid-down scenario be unleashed.

And as the top-voted comment on this Breitbart story had pointed out, should any war break out between the US and Russia, China will be waiting to pounce.

China’s biggest economic adversary is America. China’s biggest geographic adversary is Russia. How better for China to become the single strongest military and economy in the world, than to have her number two’s, take each other out. And they have the manchurian Biden throwing the first punch. Genius. Pure evil. But genius.

So with Doug Casey’s story warning of a potential ‘great die-off’ ahead, it also pointed out how there are many advantages to biological warfare over other types of warfare, so it will probably be featured. It’s probably inevitable, now that the technology has made it practical. What are the advantages of biowar? What might wargaming generals like about it?

First, it doesn’t destroy materiel. That’s a huge plus. After all, what’s the point of conquering a country if all you have to show for it is a smoking radioactive ruin? That’s the major advantage of the neutron bomb, of course; it kills the people but limits damage to buildings. Bioweapons essentially make atomic weapons obsolescent.

Second, bioweapons can be structured to attack only certain racial groups. That’s potentially either a big advantage or disadvantage to China. The diverse population of the US could also be either an advantage or a disadvantage, depending on who strikes first. But, on the bright side, you can perhaps immunize your own population, or at least the military and “essential” workers, to control the damage.

Third, bioweapons are very cheap and easy to fabricate. Anyone with access to a good high school chemistry lab is in business. There’s no need for expensive and tricky U-235 or, for that matter, any of the junk toys the Pentagon spends hundreds of billions on.

Fourth, bioweapons don’t need sophisticated delivery systems; again, no need for B-2s, B-52s, cruise missiles, ICBMs, or any of that. A sick tourist or two, or a few packages sent in the mail, can get the job done.

Fifth, bioweapons, whether they’re viruses or bacteria, not only offer plausible deniability but the potential to blame a third party. You can launch an attack, and nobody can really be sure who did it. Or even that an attack is, in fact, being launched.

There’s every advantage to biological warfare from an aggressor’s point of view. And, the aggressor doesn’t even have to be a nation-state, which is, of course, another excuse for governments to further clamp down on their populations, as COVID has shown. Guns are good self-defense weapons, and governments are trying to eliminate them; basement biowar labs are strictly offensive. Imagine the bureaucratic enforcement possibilities.

Quite interestingly and concerning, soon after that Doug Casey story hit the internet, actually reporting within it about Deagel’s lengthy ‘disclaimer’ we featured above, all of that was removed from their website. Why? In the first video below, which was created prior to Deagel deleting their 2025 warning, we hear why they’ve been forecasting massive depopulation for the Western world ahead.

And in the 2nd/final video below, we hear that President Putin has just warned countries in the West not to cross what he called a “red line” with Russia, stating that it would trigger an “asymmetrical, rapid and harsh” response.