With Democrats/globalists all across America now declaring all-out war upon Christianity, Christmas, Thanksgiving and ‘the American way’ in the ‘name of their perceived safety’, story after story have come out over the last several days which prove, if we think 2020 was bad, we haven’t seen anything yet.

While Democrat Oregon Gov. Kate Brown threatens jail time & fines for anybody who violates COVID-19 Thanksgiving restrictions, in Germany they just passed the benign-sounding ‘infection protection law’ which have been compared to Adolf Hitler’s ‘Enabling Act of 1933’ which helped usher in his dictatorship.

And with German politicians wasting no time at all to bring the law down in full force upon its citizens, with Doctor Andreas Noack in Germany giving a live Covid-19 report on Youtube when police broke into his house with guns pointing straight at him, it’s clear that those in Germany and across the planet who have ‘cried against fascism’ are helping to create the most criminal dictatorship in history.

You can see the German police busting into Dr. Noack’s home and pointing a gun at him for reporting on Covid-19 at this twitter link and in the final video at the bottom of this story.

And while globalist-outlet DW reports that attempting to compare the ‘Infection Protection Law’ proposed by Angela Merkel to the law that paved the way for Adolf Hitler’s dictatorship in 1933 ‘are hardly comparable’, their story also reports: The infection protection law will now create a legal basis for the government to restrict some fundamental rights enshrined in the German constitution in its attempt to fight the pandemic. Oh what a ‘slippery slope’ is tyranny! 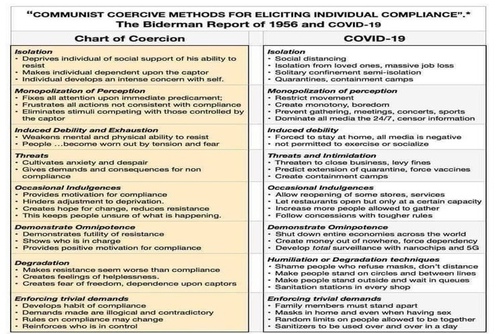 As we see in the chart above, there are absolutely alarming similarities between documented “Communist Coercive Methods for Eliciting Individual Compliance” and the lockdowns being thrust upon America by governments all across the country and the planet due to Covid-19.

With the chart above comparing the Communist brainwashing techniques used by Chinese and North Korean soldiers upon Americans captured to make them psychological as well as physical prisoners as documented in The Biderman Report of 1956, just compare the brainwashing methods used by Communists against Americans back then to the ‘brainwashing’ of Americans in 2020! Unreal, huh?!

And with a vaccine now being pushed that allegedly has a 95% ‘success rate’ for a virus that has a survival rate of approximately 99% according to the CDC itself, what are Americans NOT being told? Why the huge rush to inoculate Americans across the country with a vaccine LESS effective than the 99% ‘survival rate’ of most healthy Americans catching the virus, anyway? Something is rotten to the core in America. From this Infowars story before we continue.:

“If COVID-19 overwhelms our hospitals, there won’t be enough doctors, nurses, health care workers, or beds if you or a loved one need care. We can’t let that happen. That’s why COVID-19 Freeze measures take effect today,” Brown declared on Twitter, including a list of all the types of businesses and services that would be affected.

According to Brown’s emergency order, violators could face 30 days in jail, a $1,250 fine, or both.

Incoming chairwoman of the Clackamas Board of County Commissioners Tootie Smith (R) stated on Facebook that she would defy Brown’s unconstitutional orders.

“My family will celebrate Thanksgiving with as many family and friends as I can find,” Smith posted last week in the wake of Brown’s initial announcement.

“I don’t know if there’s going to be a knock at the door,” Smith told The Oregonian. “But I’m going to, in my very private home with my family, continue to celebrate this holiday and Christmas as well.” 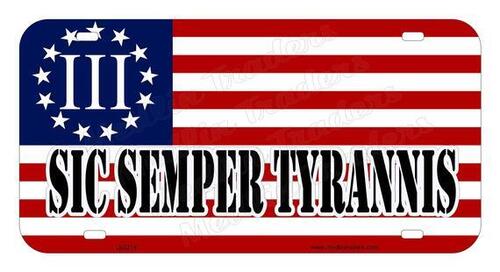 As Susan Duclos had pointed out in this November 17th ANP story, Oregon is by far NOT the only Democrat-run state descending into mass covid-19 tyranny. With ‘Compliance Ambassadors’ now a very real thing in America as Orwell’s ‘1984’ becomes a reality, thank God for Sheriff’s such as Saratoga County Sheriff Michael Zurlo, who’ll refuse to enforce NY Governor Andrew Cuomo’s tyranny, and who summed up objections to ‘Covid-19’ Thanksgiving crackdowns nicely.

“I can’t see how devoting our resources to counting cars in citizens’ driveways or investigating how much turkey and dressing they’ve purchased is for the public good,” Zurlo said in a press release.

This has nothing to do with “virus fatigue,” it’s a common-sense rebellion against insanity.

“Frankly, I am not sure it could sustain a Constitutional challenge in Court for several reasons including your house is your castle,” the sheriff wrote in the Saturday post.

“And as a Sheriff with a law degree I couldn’t in good faith attempt to defend it Court, so I won’t,” he said.

The time has passed when grasping politicians can use the public health crisis to impose unconstitutional restrictions on citizens. The Great Virus Scare of 2020 is over and if Joe Biden tries to bring it back, he won’t find meek and mild sheep doing everything the experts are telling them to do.

This, from a Mississippi public health official is typical of the scaremongering that isn’t going to work anymore: “It’s going to happen. You’re going to say hi at Thanksgiving, it’s so nice to see you, and you’re either going to be visiting her by Facetime in the ICU or planning a small funeral by Christmas,” the MSMA president said.

As for the sheriffs, they’re telling Cuomo that if he wants to keep people apart, he can do it himself. (Hopefully if Cuomo tries, the 2nd Amendment will be waiting for him!)

Giardino noted his office, with limited resources, has scant legal options to enter private homes other than search warrants, invitations or under an “emergency circumstance.”

“We have limited resources and we have to set priorities, so obtaining a Search Warrant to enter your home to see how many Turkey or Tofu eaters are present is not a priority,” Giardino wrote.

This is something Cuomo would know if he weren’t such an arrogant, elitist, snob. Apparently, he thinks that simply by snapping his fingers and issuing a decree, his will becomes law.

And as this previously mentioned story over at Infowars concluded, “this isn’t about public health. This about asserting control over the people, isolating them and crushing their spirit just in time for the holidays.”

Brown isn’t the only Democrat tyrant to impose such authoritarian measures as Thanksgiving approaches.

Gov. Gretchen Whitmer (Mich.) also announced in a press release extremely restrictive measures that would take effect Wednesday, such as only two households allowed to gather indoors at a time, while up to 25 people will be allowed to gather outdoors, suspension of eat-in dining at restaurants and bars, statewide closures of high schools and colleges.

“I know people are tired of living like this, but we have to double down,” Whitmer said Sunday. “We potentially could be looking at the deadliest, most grim days of this virus ahead of us.”

“As hard as it is not seeing [family members] this Thanksgiving, imagine how much harder it would be if you weren’t able to see them for a future holiday ever again,” she added.

Last week, Chicago Mayor Lori Lightfoot issued similar draconian decrees to take effect Monday against Thanksgiving gatherings in the name of curbing the China Virus, for which she received backlash after bull horning for Joe Biden in front of a crowd of supporters days before.

With ‘Communism 101’ perfectly illustrated in California’s governor Gavin Newsom banning large dinner gatherings, while he himself went out to a ‘large dinner gathering’, proving that the left wants to be in power so that they can exempt themselves from their own totalitarian rules, America’s Founding Fathers fully understood that the 2nd Amendment was never drafted into our Bill of Rights for ‘deer hunting’.

In the 1st video below, Paul Joseph Watson warns us that they’re preparing to make life hell for those who won’t take a Covid-19 vaccine, with people’s jobs being threatened and worse for those refusing to take the jab. And in the 2nd video, David Knight warns us that ‘door to door blood draws‘ are now taking place in Houston, Texas, just the latest sign of what’s ahead for America in 2021 as the globalists rush our country full speed ahead into ‘medical totalitarianism’.

And in the 3rd and final video below, we see what happens when ‘medical totalitarianism’ vanquishes a formerly free nation’s Constitution, this event happening in Germany. The eerily masked ‘intervention officer’, who looks like a character out of the movie ‘The Purge’, rushes in at just past the 43 minute mark before the video abruptly cuts off. Another sign of what is ahead for America if we stay along the same path towards medical tyranny that we’re now on.