In the first video of this story embedded right below, videographer and cybersecurity expert Rob Braxman takes a look at a recent massive attack conducted upon internet encryption services, particular VPN’s, with VPN traffic throttled to the point it was near unusable. And as the top-voted comment on that video warned: “I bet it was just a test run…the big thing has yet to come…”

With Braxman telling us that basically in the first month+ of 2021, ‘the Great Firewall of the USA‘ was turned on, before being abruptly turned back off again, with the exact purpose of the action unknown, other commenters warned on the video of the future of the internet in America: “It’ll be like a point system for citizens…. with no internet if you have low points.” While a response to that comment was: “100% correct. I believe it will be much more than internet. Cell service, bank account, travel ability, etc”. And another commenter left a final ‘we told you so’ to the American people:

“Snowden and Assange tried to warn the world. Their reward? Banned and scolded by society.“

With Braxman also telling us that no party has stepped up to acknowledge that recent attack upon the internet, and with no one besides him stepping up to call and call out any ISP’s for their egregious action against privacy, we shouldn’t be the least bit surprised going forward about anything that happens to the internet, especially with ‘the globalist establishment’ seeking to become ‘techno-masters’ over us all as Susan Duclos warned in this February 18th ANP story.

With another excellent comment on Braxman’s video below being: “It sounds like a capability test ‘run’ to work out the bugs before mass insurrections begin. The Capital Insurrection spooked ’em. Welcome to 1984”, and another commenter warned: “The noose is tightening, the gates are closing”, this closing comment before we play the video was straight to the point:

“That has to be taken very seriously!!! Last events happening in USA are very scary. That’s how the communist governments work.”

So let’s take a look at this video from Braxman titled “The Great Firewall of…America?” before we continue.http://www.youtube.com/embed/38za1LYj2XQ

As Susan Duclos had also warned on ANP back on December 14th in this story titled “Killing The Internet To Hide The Truth? Prepare For Them To Shut It All Down – Imagine Awakening To No Internet As Hacks, Censors And ‘Convenient’ Outages Are Increasing”, with censorship once again kicked into high gear across America as ‘big tech’expands their ‘war upon truth’, what we have left is an entire nation of clueless dolts, ‘socially engineered’ by people like Mark Zuckerberg or Jack Dorsey.

With the dumbed down masses likely not knowing the truth even if it hit them in the face like a ton of bricks, as we’d also warned within this November 14th ANP story, ‘truth will be silenced forever if these monsters get their way’. But ‘getting their way’ absolutely requires some kind of ‘internet kill switch’, because while the globalists can control the mainstream media, the internet is a totally different beast.

And while the left screamed like mad back in August of 2020 “It’s Time To Take Away Trump’s Internet Kill Switch”, that ‘kill switch’ is now in Joe Biden and the Democrats hands; think that they wouldn’t use it if they felt things were totally slipping out of their control at some point in the future? And we shouldn’t be the least bit surprised that leftists were crying over China. From this August 2020 ‘Access Now’ story.

U.S. President Trump has banned two apps affiliated with companies in China based on an emergency for which there is little public evidence. If Trump is willing to exercise his emergency power without evidence to ban apps, he may avail himself of a similar law that allows him to shut down the internet entirely. To #KeepItOn in the U.S., we must dismantle the president’s kill switch.

And this October of 2020 story from Tech Crunch warned of how ‘authoritarian regimes’ could use the ‘killing of the internet’ to usher in tyranny though they too hinted of Trump, not Biden, even though Biden is now the person most likely to use the ‘internet kill switch’ in the days/weeks ahead.

A pair of U.S. Representatives — one from each party — are proposing a law that would limit the president’s ability to shut down the internet at will. That may not strike you as an imminent threat, but federal police disappearing protestors into unmarked vans probably didn’t either, until a couple months ago. Let’s keep an open mind.

The president has the power under the Communications Act’s Section 706 to order the shutdown of some communications infrastructure in an emergency. While this was likely intended more for making sure official phone calls could get through in a national emergency, it’s possible that today it could be used as a measure to tamp down on protests and civil unrest, as we’ve seen in authoritarian regimes around the world. 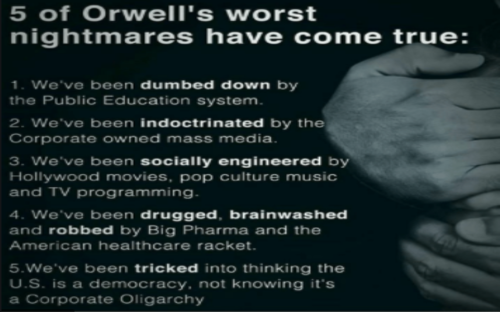 So with Joe Biden now in control of the internet, another commenter on Braxman’s video warned of the inevitable for America if we keep on the path we’re now on:

“The state and their fascism-controlled corporations will own the infrastructure for the foreseeable future”.

While another commenter chimed in as “The US Government’: We need to protect you from all the bad guys, so we need to get our own national firewall in place to “protect you”.

Andanother commenter bluntly warned: “Democracy is on its way out. Hope you own guns.“

So with the Biden administration attempting to paint the way for banks to refuse service to the Democrats perceived ‘enemies’, what’s being called ‘Operation Choke Point 2.0’as reported in this new story over at the Federalist, how long will it be until grocery stores and utility companies and other so-called ‘essential businesses’ follow suit, like some are now threatening to do to ‘Covid-vaccine refusers’?

With Democrats in Congress now working with Biden’s White House on a sinister plan to crack down upon dissent in America while eliminating First Amendment rights in an attempt to make it impossible for ordinary Americans to question their authority as reported in this new Gateway Pundit story, we should all be prepared for madness unfolding in America in the days ahead, especially should Biden and the Democrats carry out one of the ultimate acts of tyranny and take down the free internet.

Feminists don’t like the Apostle Paul and I will tell you why.

“The head of the woman is the man.”

“The woman is the glory of the man.”

“The man is not of the woman; but the woman of the man.”

“Neither was the man created for woman; but the woman for the man.”

“Let the women learn in silence with all subjection. But I suffer not a woman to teach, nor to usurp authority over the man, but to be in silence.”

“Wives, submit yourselves unto your own husband; for the husband is the head of the wife…let the wives be [subject] to their own husbands in everything.”

“Wives, submit yourselves unto your own husbands, as it is fit in the Lord.”

“Likewise, ye wives, be in subjection to your own husbands; that, if any obey not the word, they also may may without the word be won by the conversation of the wives.”

“For after this manner in the old time the holy women also, who trusted in God, adorned themselves, being in subjection unto their own husbands. Even as Sara obeyed Abraham, calling him lord: whose daughters ye are, as long as ye do well, and are not afraid with any amazement.”

“That they may teach the young women to be sober, to love their husbands, to love their children, to be discreet, chaste, keepers at home, good, obedient to their own husbands, that the word of God be not blasphemed.”

These are verses from 1 Corinthians, 1 Timothy, Titus, Colossians, 1 Peter, and Ephesians; all written by the great Apostle Paul, yet feminists like Beth Moore and other false teachers will say that Jesus’ words (the red words) are what’s really important. Did you know that all of the words in the Bible are red words? They were all written by God Almighty who inspired those who wrote them. ALL of His commands to us, women, are for our good.

All scripture is given by inspiration of God, and is profitable for doctrine, for reproof, for correction, for instruction in righteousness.
2 Timothy 3:16