To those who understand what is going on, we all know the left lies daily, they lie about those who are telling the truth, and they lie about themselves, saying they tell the truth.  So, they tell lies, lie by saying they are telling the truth, and tell a third lie by saying those telling the truth are lying.  It’s very hard to keep straight. Liars are so incredibly damaging.  Yet, that’s what the Vallejo Times Herald does daily, and most of America’s newspapers, schools, and tech companies.  It’s a wonder Americans agree on anything when Jack Bungart and the Times Herald, along with the rest of the lying left are done.  We are supposed to quietly sit and not object to being lied to.

Part of the reason why this works so well, is half of America is functionally illiterate. So, wealthy Democrats are used to getting their way, by using their media, tech companies, and schools to push any idea they like on a naive and gullible population.  They are now trying to push a coup attempt on America with their bogus impeachment charges.

For the past few decades, the schools have been dumbing Americans down badly.  Alex Newman describes it perfectly in the included 15 minute video.

Let’s give an example of the lying and propaganda.  Today, on Vallejo City Politics, Vallejo race baiter, anarchist, and trouble maker extraordinaire, TJ Walkup, posts a video of a colleague of mine, Don Grundmann, a very good man, saying ‘We are a racist peaceful organization’.  What TJ is trying to do, since he just talked to me on Tuesday, is slander me as a racist, by association, and stir up hatred towards me personally.  He is devious and diabolical, and these types never stop, most never having been disciplined as children.  You may watch what he posted for yourself.  Even USA today, not noted for being conservative or reliable, noted that it was a gaffe. Anyone watching the whole video of Mr. Grundmann’s remarks knows they were not racist.  The NY Post, another somewhat rightwing source, says it was a gaffe, but does not clearly outline Mr. Grundmann saying that.  I even called Mr. Grundmann to ask him, and he personally told me that it was an accident.  If you watch the entire video, he was saying he was not a racist, and was so outraged, that he inadvertently stated we are a ‘peaceful racist group’.  The entire audience knew this, and like the left is fond of doing, they never admit their own faults, but they love to make up faults about others, and take things out of context.  Mr. Grundmann also confirmed that he opposes Planned Murderhood, which has killed 19 million black babies in the last 46 years, and is the biggest killer of blacks in world history, far bigger than the Translantic Slave trade. 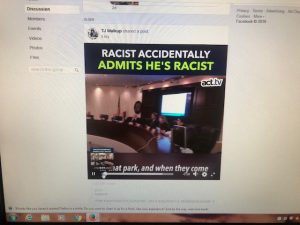 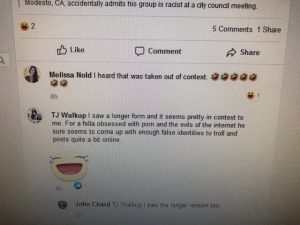 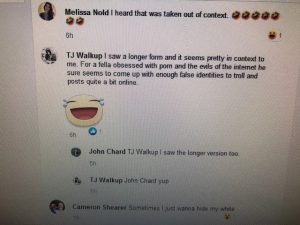 Who should comment on TJ’s fake news post?  Why, none other than Vallejo Police Hater Melissa Nold.  The woman who comes to Vallejo to lecture us about racism and our police force constantly, but who knows nothing about American history, or actual documented data supporting her cause.  What is the good of going to law school, if you believe in a bunch of fairy tales about America and whites?  She honestly believes if you wave a college degree, and scream and yell loud enough, that makes you right.  The same woman who took Council Member Verder-Aliga’s innocuous comments about victims of controversial police interactions, offensively, says ‘I heard that was taken out of context’, followed by 7 laughing emoji’s, showing that she is saying that sarcastically.  TJ follows up with more slander.  And no one contests this.  A Deborah Rucker and Cameron Shearer both laughed approvingly at it, and Cameron cuttingly says he wants to hide his white, as if he’s ashamed of the clear racism of his fellow whites.  Of course, if you are a latino or a black person reading this, you might think Don Grundmann is a racist, and that I, since I ally with him, am one too.  And it’s slanders like these, that can get the average person hating me, and can easily result in a person hitting or attacking me for no reason at all. And this is what the left lives for.

Notice, how the left doesn’t ask questions. TJ is a notoriously lazy thinker, and whatever the media, tech companies, or schools say, he is the first to parrot it.  TJ didn’t thoroughly research these very serious charges at all.   Like most of the other mindless drones on the left, he runs to Google, runs down their algorithm rabbit hole, and when he comes up again, he’s convinced he’s got the entire truth and there is nothing more to be learned.  This is why Google is so dangerous, because  it’s algorithms brainwash millions of other poor Americans, just like TJ, every single day.   If you type in Don Grundmann’s name, you’ll likely think he’s a massive racist.  So, this is how Google’s Social Justice algorithms work.  If anyone accuses anyone else of being racist, sexist, hateful, a misogynist, a bigot, a homophobe, a xenophobe, an Islamophobe or any of the other Marxist Identity Politics terms, then if you ever search for the accused, these are the first search results that pop up. It’s Google’s version of the French Revolution and the guillotine.  Google hates God too, just like the leaders of the French Revolution, so they create their own standards for what is right and wrong.  And, if you search on Google, for someone Google hates, and Google hates Don Grundmann and me, Google will send you all kinds of disturbing, non factual, slanderous results, to make the searcher believe we are evil people and deserving of harm.  Since half of America is functionally illiterate, as aforementioned, these tactics are dangerously and devastatingly effective.

This is just one incident in the millions of these incidents taking place in America.  May the wise profit from this.  Foolish types never will.

What TJ did to me and Don Grundmann, the left does to Donald Trump EVERY SINGLE DAY!  They count on the intellectual laziness and apathy of tens of millions of Americans who HATE to thoroughly prove their beliefs, and would prefer to rely on ‘expert’s’, popular opinion, or the media, and schools to think for them, to ensure their evil agenda is carried out.

It is nothing new.  What TJ did, and what the left does to Trump daily is what Iago did to Othello in Shakespeare’s play.  Constantly whispering lies to him about Desdemona, and making Othello hate Desdemona so much, that HE EVENTUALLY KILLED HER!  Only after she died did he realize she was innocent and he was badly deceived.  This is what the left is trying to do with their lies.  They want Americans to rise up and seriously harm the object of their lies, for them to gain more power, and to destroy their enemies.

Linge: Why the left’s belief in a Swedish ‘Utopia’ is based on a lie.

Ellis: The rise of the Media-Intelligence Complex

Showalter: Looks as if the Deep state planned that whistleblower hoax all along.

Jones:  The 800 Pound Gorilla in the Impeachment room.

Canto Jr.:Will this go down as the mother of all traps?

All Hell Is About To Break Loose: The Truth Hidden By The MSM And The Frantic Panic Behind The ‘Impeachment Push’ As Media Work Overtime To Protect The Deep State Lies

Gore: The Illusion of Control.

Timeline of a ‘six ways from Sunday’ shadow war: Whistleblower rule change, other events in context

Klayman: The only way to hold the Biden’s accountable.

Sitek: Will Democrats’ Trump-hatred push us into a new civil war?

Lifson: Mini AOC is back with ‘Cimate apocalypse in 12 years’ parody video.

Wysong: Sarah Palin and the collapse of the Democrats.

Will President Trump Kick China out of Financial Markets?

Elizabeth Warren demands that both Kavanaugh and Trump ‘be impeached’

Showalter: Even the illegals are fleeing California, and half the state’s voters want to leave too.

Dershowitz: ‘Neither is Congress above the law’